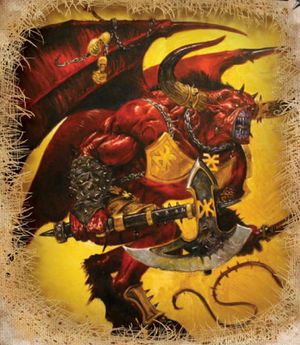 Bloodthirsters are the Greater Daemons of Khorne. [5a]

A single Bloodthirster on its own is a harbinger of death to an army of mortals, as it is destructive beyond imagination and lives only to slaughter, maim and rend. In combat it is a blur of a frenzied motion of combat, its monstrous size and martial skill make short work of all who dare to cross it. They are without doubt the most warlike and aggressive of all Daemons.[5a]

Standing far taller than a man, they have bestial legs with claw studded hooves, horned dog like faces and huge black and crimson wings. Red fur coats their bodies and their eyes are white without pupil or iris. [4a]

The Bloodthirster is the very fury of war made manifest existing of unfettered primal rage and frenzy. Of all Daemons, of all the Chaos Gods, they bear the greatest resemblance to the stereotypical daemon, having a humanoid body, cloven hooves instead of feet, leathery bat-like wings and horned bull-like heads whose huge maws are lined with sharp canine teeth. [2a]

The most ferocious of thier kind, blessed by the Blood God and knighted to join his honour guard. They are larger and more powerful than their lesser kin and can only cross in the world of mortals through exceptionally large rifts. When they do they are a match for an entire army as they seek to claim a mountain of skulls for their lord and master. [3a]

Beneath the roaring fury and unending hatred there is the intellect of a keen huntsman and a fierce warrior pride that will not bear wounding. Unlike the greater daemons who serve other Chaos powers, a Bloodthirster will work no magic, for their lord abhors the practice of sorcery. They more than make up for its lack in brute force and single-minded devotion to the aims of the Blood God who gave them existence, being driven purely by the urge to slaughter. The foolish or cunning may attempt to reason or bargain with other daemons, but a Bloodthirster cares not for rhetoric or promises. [2a]

They are armed with both a fiery whip and a massive two-headed battleaxe and wear a suit of brazen armour decorated with Khorne’s skull rune. [2a]