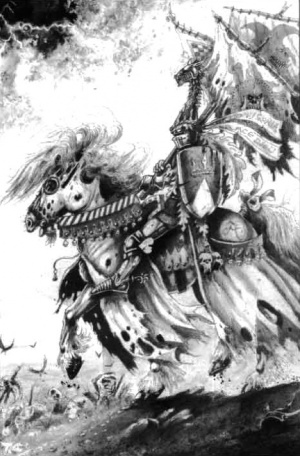 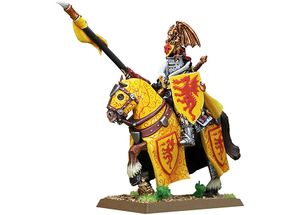 Duke Bohemond of Bastonne, famed as the Beastslayer, was a mighty Bretonnian Lord, Grail Knight and Duke of Bastonne.

Duke Bohemond is a Grail Knight, particularly renowned for fighting monsters, to the point that he is known and renowned as the "Beastslayer". He is also famous for refusing to fight inferior opponents; even if they attack him, he merely stuns them so that he can turn his attention elsewhere. As his prowess has grown, the search for worthy foes has taken him to many places within Bretonnia and beyond. He was one of the few Dukes to ride personally to the aid of the Empire against the Storm of Chaos and was a major part of Bretonnia's defense during the End Times.[1]

The Beastslayer's famous quest for the grail, was known to have ended in a vicious duel with a massive Dragon. Casting his opponent down, Bohemond would create a mighty mace from the dragons immense thigh bone.[1]

Whilst Bohemond is a lineal descendant of Gilles le Breton, he is absolutely loyal to King Louen and has no desire for the crown. Indeed he delegates the whole business of running his dukedom to his steward and justice to his justicar. The Dukedom of Bastonne is perhaps the oldest and greatest in the realm and the Duke is traditionally one of the King's most important nobles. Bohemond fullfilled the Grail Quest before inheriting the Dukedom, with the King himself requesting for him to accept lordship over his ancestral lands. Bohemond's vast estates are almost entirely rural. His castle of Bastonne is located overlooking the Forest of Chalons. From here Bohemond and his mighty knights wage constant war against the Orcs, Skaven and other vile creatures infesting the mountainous wilderness in the heart of Bretonnia.[1][2]

Smoke from the burning village drifted through the upper branches of the trees and carried the scent of burning flesh and grain. The waters of the river foamed red with the blood of the fallen, and the knights warhorses tossed their heads and snorted as they caught the scent of battle.[3]

Duke Bohemond of Bastonne, known far and wide as the Beastslayer, rode at the head of his knights down the rutted road of har-packed earth towards the village. By daring to attack a community so close to his castle, the beasts of the forests were displaying a boldness that could not go unanswered, and Bohemond swore that every last twisted beast that profaned his lands here would perish.[3]

He saw a group of bestial creatures armed with crude axes and swords loping towards a small building of white stone, adorned with bright cloths and gaudy ornamentation. A disheveled woman in her night attire knelt before it in prayer and begged the Lady for protection and salvation. Bohemond shouted in rage that the Shrine must be protected at all costs. He raked back his spurs, leaned into the charge and braced the flare of his lance against his breastplate. His knights matched his pace as they rode past the first victims of the slaughter, a woman and two small children whose bodies had been ripped apart by fang and claw. Ahead the villager's attackers bellowed in warning as the rumble of Bohemond and his knights charge echoed from the valley-sides. The earth trembled beneath the mighty warhorses hooves - a rolling thunder that grew in power as their speed increased. The Dragon standard of the Duke snapped and billowed from the banner pole, its colours bright against the darkness of the sky.[3]

The knights lowered their lances as their steeds covered the last few yards between them and their foes. The horned creatures howled their challenge and raised their axes in defiance. With a crash of steel on iron, Bohemond and his knights smashed into the braying monsters with the fury of the Breton himself. Lances spitted foul denizens of the forest on iron tips, and swords chopped down, hacking limbs and heads from furred bodies. Those beasts spared the initial slaughter did not survive the hooves of the warhorses. The knights steeds, thrilling to the scent of blood and battle, lashed out with iron-shod hooves to split skulls and shields alike. Duke Bohemond rammed his lance into the belly of a massive beast with a horned head and dark fur matted with blood and filth. The impetus of his charge punched the creature from its hoofed feet, and it bellowed in pain. Dark blood jetted from the wound before the lance snapped and the copse was crushed beneath the Beastslayer's warhorse. [3]

Bohemond tossed away the splintered lance shaft and drew his sword. It shimmered in the evening light, its ever-sharp blade blessed by the Fay Enchantress herself. He hated to sully its bright sheen with corrupted blood, but the shrine of the Lady had to be protected at all costs. He wheeled his horse, charging back into the combat, and beheaded a monstrous beast with the head of a snarling Bear. His knights fought with courage and honour, bellowing out cries for the lady, spurring them on to greater heights of heroic endeavor as they meted out vengeance for the fallen villagers and defended the honour of the lady. No quarter was offered. Within moments, the ground was drenched in the foul lifeblood of the bestial creatures.[3]

The knights let out a cry for Bastonne as the Duke's standard was raised high and the shrill clarion call of the horn pulled them into formation once more. The shrine had been saved, but there were yet beasts within the burning village to dispatch. Bohemond smiled indulgently as the woman who had been praying before the shrine ran to him and clasped his armoured leg. She pulled a ribbon from her hair, giving it to him and declaring it would bring him victory. The Duke nodded and allowed the peasant to tie the ribbon around the hilt of his blessed sword. He decided not to chastise her for suggesting that he and his knights needed her paltry token to win this day. He lifted the sword high and walked his horse forward as frenzied beasts charged from the sacked village towards them.[3]

The Duke snarled to kill them, and as one he and his glorious knights charged into the smoke and flames once more.[3]

The Beastslayer would be one of the few heroes to survive into the very end of the Old World, Bohemond stayed within Bretonnia alongside most of the Grail Knights, defending it from an endless horde of enemies. He was last reported to have been fighting alongside Abhorash and his ancestor Gilles le Breton during Bretonnia's last stand.Needs Citation

Bohemond was a powerful warrior, possessing the enhanced abilities gifted to all Grail Knights. He often fought with a blessed sword, his dragon mace and an enchanted shield. The Beastslayer also possessed a lance forged into the shape of a snarling dragon, and his skills were honed through fighting the mightiest beasts in the Old World, such as Dragons, Manticores and Hydras.Needs Citation