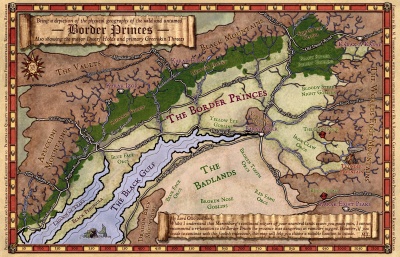 A map of the Border Princes. 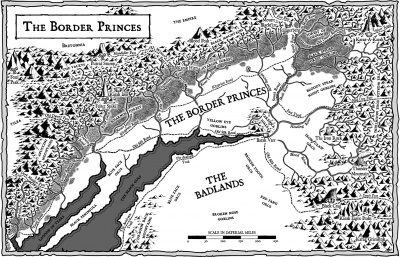 A more detailed map of the Border Princes.

In former times the Border Princes were largely inhabited by savage tribes of Greenskins, but now the land is fiercely disputed by the hardy human colonists and many Orc and Goblin tribes. When a large army of Knights Errant came across the greenskins on their way to the Arabyan Crusades, they drove them from the land and built great castles to hold back the Orcs, becoming the first Border Princes. The human colonists are tentatively organized into tiny kingdoms, small principalities, and independent city-states, but most of them are little more than fortified villages. All of them are targets of fierce Orc incursions and few survive for very long.

The colonists are somewhat stronger in the north-west, while the Greenskin hordes dominate the south-east. Even in the north some Orc and Goblin tribes live in hard-to-reach places like forests and mountains. In the centre of the whole region lies Barak Varr, the great seaport of the Dwarfs. The Blood River is the ultimate frontier, but no place north of the river is completely safe from the occasional Orc or Goblin raid.