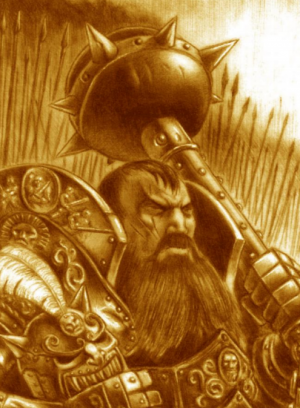 Borgio, Prince of Miragliano, nicknamed “The Besieger” because of his unsurpassed expertise in siege warfare, is the deceased ruler of Miragliano and was once one of the greatest Mercenary General of his age. [1a]

It was said that no Tilean city, not even the ingenious ramparts of Miragliano itself, could defy him. Borgio was certainly an expert tactician and won most of his battles.[1a]

In three great victories he established Miragliano as the most powerful principality in Tilea. After these, his enemies usually avoided open battle and shut themselves up behind the walls of their cities, only to succumb to Borgio's siege techniques. He was equally astute as a politician, but rather tyrannical. Opponents and rivals did not last long.[1a]

During his career, Borgio fought against every other principality and republic in Tilea for one reason or another, from wars over trading rights to pure vendettas against rival Princes who had tried to have him assassinated. Indeed, there were so many failed attempts to assassinate Borgio, some of which came very close to success, that he gained a reputation as a man who had to be killed more than once to be sure. It is said that Borgio once defeated an Orc horde by splitting them into three parts. Opinion is divided as to whether this refers to the horde or the individual Orcs. It is also said that Borgio could ride a horse, go to sleep and read a book at the same time. [1a]

Another apocryphal tale says that he was once taken prisoner by the Pirate Princess of Sartosa and escaped by diving into the sea from the dungeon tower, which was conveniently leaning over a high cliff and swam the Pirates' Current across to Tilea. Then he returned with a mercenary fleet, captured the princess and would not let her go until the pirates had paid him an enormous tribute gathered from their far-flung stashes of plunder. If this ever happened it must have been early in his career. [1a]

Unlike many decadent Merchant Princes, Borgio is a man of many skills and traits. It is rumoured that Borgio wrote very good poetry, did all his own cooking (to avoid food poisoning) and wrestled with lions on occassions. Borgio is noted for devising unusual battle tactics and new troop types, which usually took his opponents by surprise. He certainly had access to Leonardo's manuscripts in the library of the princely palazzo in Miragliano. He was a very big and imposing man of robust stature. In a siege he always dismounted to lead the assault over the walls in person and would strip off his armour and jump down into a moat to dig with the common soldiers. [1a]

This endeared him to the troops and he commanded a loyalty among his mercenaries which has been the envy of every Prince since. However, Borgio could not always count on similar loyalty from courtiers, intriguers and spies in the pay of rivals, who knew they could not defeat him in battle and so resorted to underhand means. There were numerous assassination attempts and many occasions when he appeared to fall in battle. However, he strangely defied death time and time again, enhancing his awesome reputation. [1a]

It is said that he finally met his end, after a long and distinguished reign, when he was stabbed with a poisoned toasting fork in his bath. This was one of several deaths which he suffered, but it was the only one that he did not survive. The circumstances are mysterious, but this was probably the only occasion that a man such as Borgio could be taken by surprise. Many say that his marriage to Dolchellata, the rather bad-tempered older sister of Lucrezzia Belladonna, was his undoing. [1a]