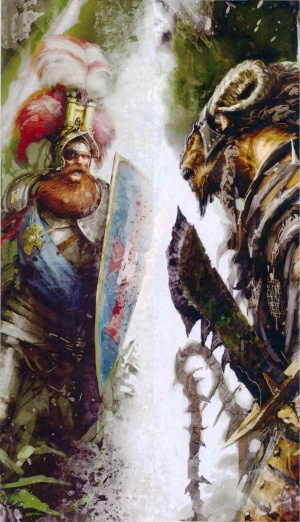 At the age of 57, Graf Todbringer stood at 6'1" (185.42cm), his strong muscles turning to fat as his brown hair thinned due to feebleness stemming from an illness caused by melancholy.[2] He was kept clean-shaven, even while bed-ridden. Ten years later however, he was much more vital, having overcome his depression (at least outwardly) and wore a thick, well-kept beard and moustache, though he also wore an eyepatch over his right eye to cover the empty socket where one of his brown eyes was plucked out in combat.

Boris did not suffer fools gladly. When Karl Franz proclaimed that there were no such things as mutants, Boris was heard to remark "the old fool has finally cracked!" and refused to enforce the Emperor's edict to prosecute those who demeaned or attacked the malformed. Boris was a devout (though not an ostentatious) worshipper of Ulric and tended to look down upon the faithful of Sigmar.[3a]

Boris grew to be a great warrior and a brilliant statesman. His father Bertholdt died at the age of 69 in 2506 IC,[4] but as of 2522 IC, Boris had been the head of his family (the Todbringers) for three decades.[5] Although he lost the Imperial Election to Karl Franz in 2502 IC, he maintained that his position as the Elector of both Middenland and Middenheim allowed him much more power - only kept in check by what his fellow Elector Counts wouldn't let him get away with.[3a] After his second wife died, the following year saw the Graf fall into an acute depression. He became incredibly pliant at court, enacting whatever policies his advisors asked him to[3a] before eventually succumbing to enfeeblement, rambling, forgetting things and an inability to concentrate.[2a] The ordinary citizenry of Middenheim however were not aware of this and believed that their Graf had the strength of will to defy even the Emperor.[3a] It was an attempt on his life by a doppelganger in the employ of one of his own Law Lords, who turned out to be the head of a Chaos cult, that seemingly brought Boris out of his depression and back to a semblance of vitality.[2b]

The Graf was still advancing in years though and whispered rumours had escaped that personal and political problems had been weighing heavily on his mind. However, he put paid to those rumours by regularly leading the armies of Middenland personally, smiting his enemies with his Runefang "Legbiter" and urging his soldiers to victory. His battles with the Beastmen in the Drakwald Forest, in particular the banebeast Khazrak (whose eye he took at the Battle of Elsterweld in 2518 IC, and in turn lost his own right eye to in an ambush outside Norderingen the year after[1b]), were a ceaseless struggle.[5]

When Archaon laid siege to Middenheim in 2522 IC, Todbringer saw that the End Times had come. Archaon laid siege to Middenheim but lifted the siege when Imperial reinforcements arrived. Todbringer gathered an army of his remaining knights, militia and allies and left Middenheim to pursue the fleeing forces of Chaos, leaving his nephew and new heir Wulfram von Todbringer, by all reports a weakling but a legitimate nobleman, nominally in charge, though Duke Ulrich Schutzmann truly ruled the city as Wulfram was sent to Boris' manse in Carroburg to keep him out of any fighting.[1b] Years later, Todbringer left his city in the hands of Valten, the Herald of Sigmar, then went out to hunt Khazrak, thinking that even if the world ended, Khazrak must die and perhaps his death might even save the world. Boris finally slew his hated opponent, shortly before being swiftly ripped apart by the Beastlord's hordes in the Autumn of 2527 IC.[6]

Boris married very early; his first wife, Maria von Richthofen, died in 2471 IC while giving birth to their son Stefan, whom Boris named as heir to his title. A few months before, Boris had learned he was father to another son, Heinrich, born to a lady-at-court. There were (unconfirmed) rumours that Heinrich was conceived the night before the Graf's marriage to Maria.[2a]

Baron Stefan was named the Graf's heir a day after his birth. Unfortunately he grew to be a drooling and palsied invalid, subject to fits of extreme violence, self-harm and mania. However, his condition improved with the appointment of the Tilean doctor Luigi Pavarotti as Stefan's personal physician.[3a] Stefan nonetheless died a few years before Archaon's first siege of Middenheim during the Storm of Chaos.[4]

In complete contrast to Stefan, the Graf's eldest son, Heinrich, was blessed with considerable intellectual gifts and physical prowess. Despite this, his illegitimate birth disqualified him from inheriting his father's title of Graf of Middenheim. He was instead named Baron and acted as one of his father's chief diplomats.[3a]

At the age of 47, the Graf took another wife, the thirteen year-old Anika-Elise Nikse, daughter of the Baron Werner Nikse of Nordland. She died ten years after her wedding, having given the Graf no heirs, in 2512 IC.[2a] Nikki had grown up to secretly become the leader of the Slaaneshi cult known as the Jade Sceptre. It is unknown how exactly she died, though officially she died of a deadly illness.[3c] Her death was the apparent cause of Boris' acute depression that left him a shell of his former self for over a year.[3a][7a]

Boris had one more child, Katarina - known informally as "the Princess". Katarina was born to a lady-at-court prior to Boris' second marriage. Katarina was beautiful and popular and even though she was illegitimate, she was courted by numerous nobles from all over the Empire. [3d]