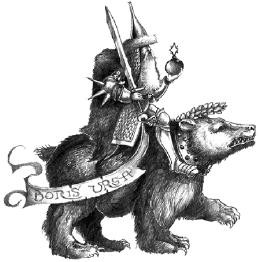 Boris Ursus was probably the greatest Tzar of Kislev. He was a fearsome and honourable leader, often striding into battle atop his mighty bear, Urskin (bear-brother).

He was born Boris Bokha, and was awarded the nicknames Radii Bokha and the Red Tzar. Being a devoted follower of Ursun he claimed the honourable titles Boris Ursa and Boris Ursus.

He took the throne from his father, Vladimir Bokha, on his death at the hands of a group of Goblins to the east of Kislev. The nation Boris inherited had done little to recover from the Great War against Chaos over 100 years before. He proceeded to nearly empty to royal coffers, rebuilding the land (roads, palaces, etc) and hiring mercenaries to retrain his armed forces as well as importing black powder and engineers from The Empire. [1a]

Though it nearly bankrupted his family and several others with him, he would be remembered for his driving spirit and eagerness to reclaim the lands infested by Goblins, Trolls, Beastmen and other vile creatures. He also brought back the cult of the Ursun Bear, which had been overtaken by the worship of Ulric, Taal and other foreign gods. He undertook himself, the test which all priests of Ursun must. He went into the forests to tame a bear. He was not heard from for 18 days and preparations began to put his daughter on the throne, Katarin, but search parties found his body being protected by a great white bear. The bear would not allow them past until Boris awoke, wounds still bleeding from vicious attacks by wolves. [1a]

It is said he found and confronted this beast, before being attacked by wolves. They worked together to beat off the wolves, but Boris was badly wounded in the process. Urskin noticed this and protected Boris until he was rescued. From then on, the bear was at his side at all time, and Boris rode him into battle, making good use of the viciousness of his talons and claws. [1a]

Boris died in a battle in 2517 IC against a force of Kurgans north of the Lynsk, deep in the Troll Country, under Hetzar Feydaj. He charged into the army but was soon surrounded. They fought together for a long time, but were eventually overcome. Urskin protected the dead body of Boris until he could escape, taking it back to the Kislev lines. It is said that Urskin still hunts those who killed its master. [1a]