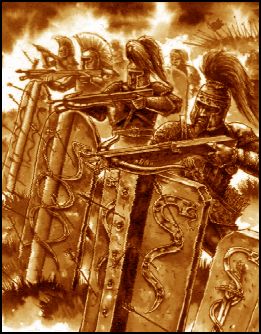 Braganza's Besiegers are a famous band of Dogs of War mercenaries that hails from the Tilean city-state of Miragliano, trained and maintained as heavily armored Mercnary Crossbowmen. [1a]

The Besiegers can be hired by any army except Bretonnia and Skaven. [2a]

These veteran crossbowmen are typically equipped with thick plate Armour that protects the Besiegers from most harms, allowing them to fight against their foe's both in range and melee combat. The mercenary company uses a certain type of shield called a Pavise, which acts as a carriable shield either strapped into the Besiegers back, to protect the crossbowen while they reload, or stacked them up in a line to act as a make-shift barricade. The armour they wear is stylized in the exotic Miragliano style, with many wearing red-crested helmets. They have a strong rivalry with the Marksmen of Miragliano, both of whom are veteran crossbowmen mercenaries hailing from the same city.

The ingenious Borgio the Besieger, the Prince of Miragliano, originally employed the famous regiment of Besiegers, as a special siege unit of crossbowmen during times of war. Borgio wanted marksmen who could pick off defenders on the walls at close range in the face incoming enemy missiles, hold ramparts against assaults, provide missile support for their main infantry, sappers, miners, siege towers, and if need be, stand their ground against enemy units sallying out of the besieged fortress. Bragnaza's troops soon proved their worth in Borgio's many sieges and were equally effective as a rearguard in open battle. [1a]

Having stormed, starved out or received the surrender of pretty much every city or fortress that he ever besieged, Borgio was well pleased with Braganaz's Besiegers and offered to find them work in return for a cut of the profits. Braganza accepted Borgio's offer at once, knowing full well that to refuse Borgio's kindness was not only impolite but also a terminal course of action. Soon the besiegers took ships for Tobaro where they took part in the siege of the pirate stronghold on the island of Cera-Scuro. Then they were hired by the Dwarfs to help recapture a very strong Dwarf outpost in the badlands, which has been overrun by Greenskin warbands. [1a]

Braganza's and his men were paid handsomely for their deed with massive chests of jewels and gems, and after finishing their mercenary contracts, the regiment began the long trek back home to Miragliano through hostile territory to deliever Borgio's agreed share of the loot, for no one ever double-crossed Borgio and lived. They battled their way across the Apuccinis Mountains during the dreaded winter, and fought off various dangers that the mountains hold. Such dangers included Bandits, Orcs, Beastmen, Empire Robber Knights, Tilean outlaw bands, renegade Bretonnian commoners who had treacherously slain their lord, starving and extremely desperate Halflings, even more hungry and desperate Ogres, and even the notorious Red Company of Remas, whose Captains had a vendetta against Braganza and his men. However, all of these attacks were stopped by the determined warriors of Braganza's company and their steady resolve during combat. [1a]

On entering Tilea, they heard new's that Borgio had been treacherously assassinated and his mighty Dogs of War army had either disbanded or split into different fractions fighting in the streets of Miragliano. Without Borgio, the company had to seek other princes for employment, less they too disband. The company luckily were hired by Lorenzo Lupo, the prince of Luccini and were sent to Sartosa where a grueling war against the many pirates lords of the islands took place. Since then, the Besiegers have fought for many master's in sieges and open battles, always standing like walls of steel, only adding to their already legendary reputation. [1a]

Invincibility at no extra charge. [1a]

In 5th Edition, they will only turn down offers of work from the Skaven. [1a]