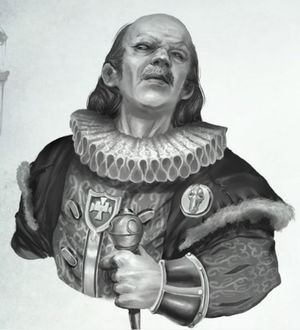 Breugal is Chamberlain to Graf Boris Todbringer in Middenheim. [1a]

Breugal is the Graf ’s head of household, overseeing all the staff in the palace and he has the final word on all domestic affairs and matters of protocol. No event takes place in the palace without his direct involvement and he schedules audiences, dinners and receptions as well as hiring and firing servants and staff of the Graf. [1a]

A tall, emaciated man, his skin aristocratically powdered white and favouring a regal, black, high-collared jacket, a white, ringletted and ribboned wig, lace ruff and a silver-knobbed cane. [1a]