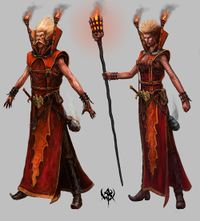 Wizards of the Bright Order

The Bright Order is one of the eight Colleges of Magic who train Wizards in The Empire. [4a]

Bright wizards are specialists with fire, and as a result have a vast knowledge of pyromancy. So much so that members of the order are mistrusted by others as they have a reputation for quick tempers and having firey characters. Bright wizards are the most skilled of all the orders in combat. Their mighty college building in Altdorf is invisible to the normal folk of Altdorf. This harkens back to the skills that the orders members have in concealment.

The order has a reputation as a powerful opponent of the enemies of the Empire and there are always many applicants to become apprentices. [3a]

Armies of the Empire

Bright Wizards are trained specifically with a career in the military in mind. with many apprentices sent to join regiments on campaign to learn what military life is like and to aid them in battle. Newly arrived apprentices are encouraged to take the field as soon as possible and throw whatever spells they can at the enemy consequently many apprentices do not make it beyond their first campaign. Other apprentices with specific skills, resourcefulness and initiative are given other jobs as the Bright College still requires intelligence, investigation, and communication. [4b]

Bright Wizards that survive their apprenticeship have several direction that their career might take based on their strengths and their career so far. Some wizards stay associated with the same regiment for their entire career whilst others also go on specific missions for the college but retain bonds of comradeship with their old regiment and there can be issues with divided loyalties between college and regiment. [4b]

The Bright Order gains the most applications as it does not discriminate in favour of the rich and powerful. [1a]

The Lore of Magic they study is the Lore of Fire. [4a]

There are eight ranks of wizard in the order, with each progression being marked by passing through increasingly large and ornate filigreed gates. The rank of a wizard can be determined by how many keys they carry and how heavy are the chains that bear them.. [2a][4a]

Many Wizards of the Order fight with the Imperial Army and so few can normally be found at the college itself. [3a]

The military of the Empire often works hand in glove with the College but the Imperial Gunnery School in Nuln has long looked upon the Bright College as a rival. [4c]