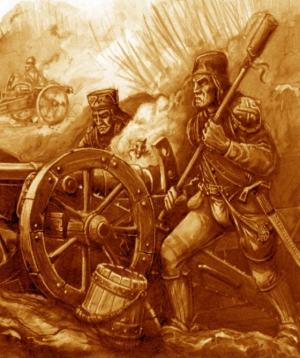 Bronzino's Galloper Guns are a famous band of Dogs of War Mercenary Cannon that hail from the rich Tilean city-state of Remas.

First employed during the Battle of Pattio, this band of mercenaries has been rewarded with fame and fortune throughout their career, first serving under the leadership of the Tilean Merchant Prince Borgio the Besieger and commanded by the titular Master Gunner Bronzino. [1a]

The Galloper Guns were in fact, lightweight cannons removed from their mountings on the galleys of Remnas and fixed onto specially made carriages, allowing for rapid deployment during the heat of battle. [1a]

This was done under the instructions of Master Gunner Bronzino, who had been hired by Borgio the Besieger to be the captain of this new artillery company. This innovation contributed to many great battles over the coming years, and as a way of commemoration, Bronizo gathered a battery of specially designed guns forged in the very same foundry as that used by the legendary engineer Leonardo da Miragliano to be melted down to forge a colossal brass statues of himself. [1a]

Soon this artillery band became infamous in their strategy of hit and run tactics, earning it an immense reputation and wealth throughtout Tilea. As a result, many other Mercenary companies began to think twice before coming up against Bronzino and his arsenal of cannons. [1a]

As they started off their career, Bronzino and his mercenary band fought for the Tilean Prince Borgio the Besieger during many battles of his reign, yet the untimely demise of his assassination has put the Gallopers in an uncertain state of affairs in Miragliano. As such, Bronzino sought out other employments. Since then the battery has turned up in the armies of several notorious mercenary generals, bringing them victory and earning Bronzino enough gold to forge more improved designs of lightweight cannons. During battles the gunners would bring up their cannons into action rapidly and fire at close range, wrecking tightly pack infantry formations before retreating once more. [1a]

This has had a devastating effect on the enemy in open battlefield. As soon as the enemy moves near enough to threaten the guns, the gunners hitch them up and gallop at full speed, finding a new position futher back. If the battle goes badly and it is necessary to retreat, the precious cannons can be removed from the battlefield without any delay. This not only saves the guns for use again, but it makes it unlikely that the enemy will capture them too thanks to its light-weight design. [1a]

Having earned a reputation in Tilea and incurring the undying hatred of the survivors of many mercenary pikemen companies, Bronzino's battery were shipped across the ocean to take actions against the Lizardmen in a doomed treasure hunting expedition led by the Dwarf pirate, Kurgar Halfbeard. Bronzino used the speed of the guns to fight a heroic rearguard action throughout the jungles of the south to the coastal beaches of the continent, killing any pursuing Saurus warriors in the droves as they went. Indeed, the easy-to-lift guns were still firing from the longboats as they were pushed out to sea, sweeping the beach clear of the enemy until they were safely in open waters. [1a]

The Battery subsequently turned up in Araby and took part in the Sultan's war against the Undead, where the speed and mobility of the guns proved decisive in the open expanses of parched sands. Greatly enriched by his efforts, Bronzino brought his battery back to Tilea where he has been reforging and refitting the guns while also considering numerous and very generous offers arriving every day from rival Merchant Princes plotting to make war on one another. Finally he took upon an offer in Miragliano and fought for the Princes of Miragliano once more. [1a]

The Galloper Guns can be hired by any army except Bretonnia. [2a]