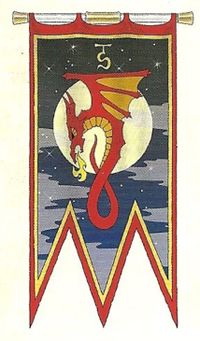 This article is about the region of Ulthuan. For other uses , see Caledor (disambiguation).

Caledor is a High Elf realm bearing a proud martial tradition. Named after its founder Caledor Dragontamer[1a], the realm is located between Ellyrion, Tiranoc and Eataine in Ulthuan.

Before the elves came to Caledor, the area was the home to many dragons, lairing amongst the volcanic caves and tunnels, linnign their nests with the gems and metals easily found nearby. The dragons here grew quickly and became larger than those of other lands whilst the population incrased until they could darken the skies with their numbers. [3a]

Caledor Dragontamer claimed this area and managed to obtain their loyalty through powerful sorcery, gaining great power over the other elves of Ulthuan. [3a]

As the continent was attacked by Daemons, only Caledor and its dragons were able to hold strogn against them, and when Aenarion travelled to the region to gain support, Caledor recognised him as chosen by Asuryan and presented him with Indraugnir, the greatest and oldest of the dragons of Caledor. [3a]

Later the many lairs of the Dragons began to cool and the dragons themselves became more and more sleepy, harder to awaken to ride to battle. Even when they can be awakened, now they often tire quickly so the Dragon lords only rouse them when absolutely neccesary. [3a]

Much of the land is mountainous, with fertile valleys rich with life, enough to feed hungry dragons. [1a]

The Elves of this kingdom and in particular the nobles are fiercly proud of their history, that they have always been the backbone of the armies of Ulthuan. [2a]

Many of the warriors of Caledor have dragons on their shields, helms and swords. [2a] Unusually they also favour black for crests and plumes, whislt armour is often crafted to resemble the scales of dragons and coloured red or green. [1b]