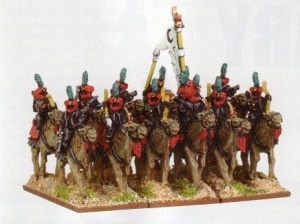 Camel Riders were a hardy and exotic form of cavalry used by the forces of Araby.

The Camel is a work-a-day creature in the land of Araby where it is common to see long trains marching from the deserts into the markets and bazaars of the coastal towns. Camel caravans carry all kinds of exotic spices, cloth, and foodstuffs from the eastern valleys of the Atalan mountains and beyond. It is only the fierce warriors of the desert tribes that ride these intractable creatures into battle. Camel riders are brave and notoriously savage warriors who navigate their way across the shifting sands of Araby by an uncanny instinct unfathomable and mysterious to mere city dwellers. They are guided as much by their knowledge of the deep desert as by their desert-born mounts and, some would say, by their taste for blood.