Captain of the Empire 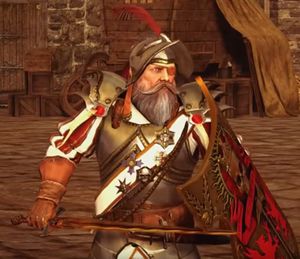 A Empire Captain or Captain of the Empire is a veteran military commander possessing of a variety of different formal titles who leads a smaller regiment or other unit of troops within an Imperial army.

These leaders take to the field of battle whenever they can. Most of the men appointed by an Elector Count to serve as officers in their province's armies will also be nobles of the Empire, educated in martial pursuits from an early age. Others, however, are commoners who have risen through the ranks as a result of their ability on the field, perhaps having first stood in the battle line themselves wielding a bloody halberd or greatsword.[4]

These officers vary greatly in rank, depending on the size of the force they lead, and are usually known within the Empire as captains, marshals, generals or sometimes simply commanders. Regardless of their social status, they will be tested veterans of many years' experience in soldiering, having spent most of their lives practicing the arts of war in defence of their besieged homelands. Captains of the Empire are variable in the arms and armour they like to wield and wear; some make use of melee weapons, while others prefer ranged weapons like the longbow or firearms like the pistol. While most Imperial officers ride powerful warhorses into battle wearing full plate armour, others have been known to ride winged Imperial Pegasi into combat, their enchanted bannners streaming out behind them in the wind. Such a spectacle is always an enormous boon to the men these captains lead under arms.[4]

Often Captains that do not lead an army are trusted with the army's Battle Standard. The most famous Standard Bearer in the empire army is Ludwig Schwarzhelm.[1][2][3][4][5a]