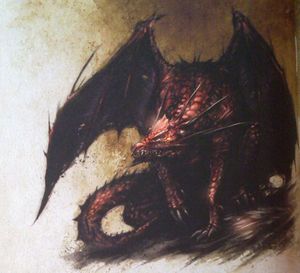 Carmine Dragons or Encarmine dragons as they are also known are rare and powerful Dragons. [1b]

They are said to be created when a lair is so saturated with the Wind of Shyish that a the magic gathers into the form of a mighty dragon. [1b]

Few will enter alliances with mortals and even fewer allow themselves to be ridden. [1b]

Their lustrous scales are supple but as hard as steel - brght red when the Dragon is newly formed and shifting to a deep purple as they age. [1b]

Magisterix Elspeth von Draken rode a Carmine Dragon at the battle of Nuln in 2510 IC although it perished in the conflict. [1a]

They favour battle sites, swamps and ruined cities - anywhere there has been death on a great scale where the spirits of the dead can whipser to them. [1b]

The breath of a Carmine Dragon is a blast of Amethyst magic which can turn flesh to dust and wither metal, the heaviest armour providing no protection. Some ancient dragons are powerful mages, always using the Lore of Death. [1b]