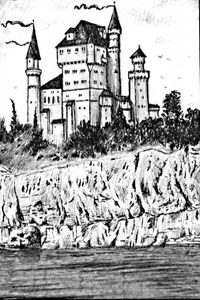 The castle seen from the Reik

Castle Reikguard is a large stone fortress in the Reikland of the Empire. [1][2a]

It is known throughout the Empire as the military headquarters of the Reiksguard Knights, providing them with Armouries, barracks, training grounds and facilities for both relaxation and religious observance. [2a]

It has both a large garrison and bombards. [1] After Gorbad’s forces withdrew it was heaviy refortifed, incorporating runic devices designed by Dwarfs to repel magic. [2a]

It has served as a retreat for the Emperor and his family in times of crisis since the invasion of Gorbad Ironclaw in 1707 IC. [2a]

It is located on the River Reik, between Altdorf and Grissenwald. [1]

It was used as the residence of Prince Wolfgang Holswig-Abenauer, the designated heir to Emperor Karl Franz. [1]