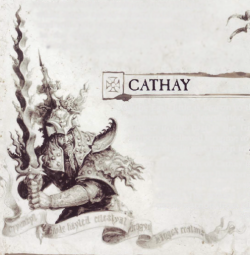 Cathay, also known as the Grand Empire of Cathay, Imperial Cathay, the Kingdom of the Dragon, or as the Empire of the Celestial Dragon, is an enormous empire, the largest nation in the world, located in the far east beyond the Mountains of Mourn.

Cathay is a land of many different peoples and cultures, all bound together by the rule of the Celestial Dragon Emperor, his wife the Moon Empress and their children who, unlike their parents descend to the lands below the Celestial City. [5]

Cathay borders the Chaos Wastes to the north and suffers from the constant and brutal raids of the Northmen tribes. To protect the land, the Great Bastion was built along the entire northern border of Cathay. This is a massive wall hundreds of miles in length, its great expanse requiring a garrison of tens of thousands.

The armies of Cathay are said to be innumerable. Its warriors are exotic, drawn from throughout the diverse lands of the empire, and include fierce hill people, strange warrior monks, and well-disciplined armies supported by heavily-armoured warriors and ornate cannons.

The Old World has no direct contact with the far-off empire, and it remains an unknown land subject to speculation. What is beyond doubt, though, is that it is the greatest power in the East.

Adventurous merchants from the Old World occasionally travel the Silk Road to reach Cathay. This is a very perilous journey due to the hordes of Hobgobla-Khan who roam the steppes along the Ivory Road west of Cathay.

The rulers of the Ogre Kingdoms, located in the Mountains of Mourn, extract a suitable tribute from the passing caravans. Some Ogres go to Cathay to sell their services as mercenaries.

An easier and quicker way is the spice route through the Sea, around the Southlands.

Strange creatures abound, from serpentine dragons and tribes of monkey warriors living in the Mountains of Heaven to gigantic stone dogs who guard the holy temples of the empire.

Cathay is at constant war with the armies of the Grand Khanate of the Hobgoblins.

King Lamasheptra of Lahmia negotiated a deal with the Celestial Empire shortly after Nagash siezed the throne of Khemri in -1959 IC. Lahmia was required to supply ten tons of gold each year, for the next three hundred years with the sovereignty of the city itself as security. In exchange they would receive arms and armour that equipped the legions of Cathay including dragon powder and dragon-staves. The delivery took place over the next century. [8a]

The Dragon Emperor and his children build the Great Bastion in -1800 IC. [7]

In -1600 IC, Prince Xian Ha Feng arrived in Lahmia and informed Neferata that the Celestial Empire was creating huge new gold mines. This, the queen knew, meant they would be unable to pay back the vast sum still owed to Cathay for the Dragon-men. [8a]

In 699 IC, the Phoenix King Aethis sends representatives who establish trade links with the nation, returning to Ulthuan with jade, silk and spices. [3a]

In 1310 IC, the Great Bastion is breached and Chaos plunges deep into the heart of Cathay. [7]

Around 1690 IC, in the 14th year of a certain Emperor Wu, member of the Wu dynasty, a massive invasion fleet was organized to conquer and colonise the Southlands. The fleet was the victim of two typhoons, one shortly after departure, the second shortly after arrival. The survivors marched inland but no one managed to return. Yin-tuan, whose ship had crossed the Great Ocean, eventually brought news of the complete loss. Yin-tuan managed to survive because of a tattoo of the Imperial Dragon made in an opium house of Fu-Chow.

When a Tilean trading expedition arrived on the border of his realm, Emperor Wu accepted the submission and tribute of Tilea and allowed them to create an enclave in Shang-Yang opening up the Silk Road in 1714 IC. The Emperor also hired the substantial, although hairy and uncouth mercenary forces to help the defend the western frontier of Cathay although they are not permitted to enter Cathay itself. [4a]

During a 400-year disappearance of both the Dragon Emperor and his wife, the natural competition between their children reached its peak, and Grand Cathay was essentially divided into warring states. The nation was then invaded by two powerful forces - Chaos from the North and the Monkey King from the South. The Monkey King managed to take power, claiming dominion over the entire Empire but this act galvanised the warring siblings to put aside their differences to fight for their father’s throne. Yet before the war could be concluded, the Emperor and Empress returned in 2380 IC helping to defeat the Monkey King, who fled South. [6] [7]

The driving force behind their society is Harmony. The teachings of the Dragon Emperor are that all must work in concert with not only themselves but also the land for the betterment of all. Everything in Cathay is driven by this from how the Dragons govern their people to the magic lores of Yin and Yang. Even in warfare, Harmony is ever-present, the military of Cathay acting in concert to lay waste to enemies with devastating precision and calm. [6]

The Dragons themselves are neither tyrants or aloof aristocrats but rather teachers and wardens for the mortal populace. They do not demand worship or that they be treated as gods although the iconography of the Dragon is ever-present throughout Cathayan society. The Dragons move among their people in human form only transforming into their draconic selves when there is need. [6]