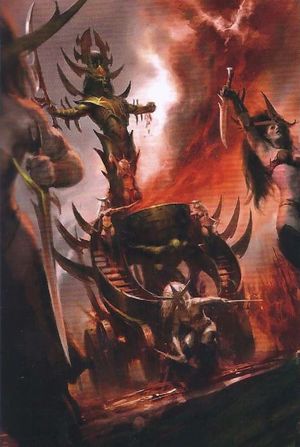 A Cauldron of Blood

Cauldrons of Blood are extremely important holy items of the cult of Khaine.

The precise numbers and origins of the cauldrons are unclear. They seem to be a handful at least and a very small number may be deployed into battle on very important raids and invasions. Each cauldron will always be guarded by two Witch Elves, the Cauldron Guardians under the command of a Hag Queen, titled the Keeper of the Cauldron.[1b]

Those few that still exist are held by the cult in the city of Ghrond. [2a]

Morathi claims that the cauldrons are Khaine's gift for his brides, the Witch Elves.[4a] A number of Dark Elf children are offered to Khaine and ritually tested by the cauldrons. The reasons are many: some children are offered because they are born crippled. Most will die but those who survive are considered to be Khaine's chosen. After each battle a suitable tithe of prisoners of war will be delivered to the Witch Elves, who will sacrifice them to Khaine.

The cauldrons are made of brass and filled with the blood of victims, ritually sacrificed by the Witch Elves to Khaine, Lord of Murder. The cauldrons never spill over; the blood simply never rises above a certain level.[1a][3a]

Morathi keeps the innermost secrets of the cauldrons to herself, and keeps the Cauldron of Battle the first and most important one for herself claiming that it is a personal gift to her. This enables her to maintain her beauty throughout the whole year.

Once per year, on Death Night, the cauldrons are filled with the blood of sacrificed Dark Elves. The oldest Hag Queens will then bathe in the blood and this ritual restores their youth and beauty, albeit only temporally.[1a]

During a battle, nearby Witch Elves are driven into a even more frenzied state by the cauldron, [1a] the powers of the cauldron unlocked by a Death Hag. [4a]

In 4th Ediition there was only a single Cauldron. [1a]