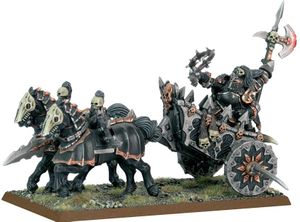 The Chaos Chariot is a war machine of Chaos, in appearance resembling lesser chariots of their pathetic foes. [1]

This creation, however, is vastly superior, with its massive body forged in hell itself, the unholy skill of its makers vastly increasing its durability, while the scythes on its wheels further increase its impact. It is propelled forward by a pair of Chaos steeds, mutated horses possessing unnatural strength. If the enemy survives the scythes on its wheels and the hooves of the steeds, then they will probably fall prey to the halberds of two Chaos Warriors driving this tool of the Dark Gods.[1]

Often a Chaos Champion will ride to battle on a chariot, covered with banners, trophies and icons that display his allegiance and past victories. [2a]