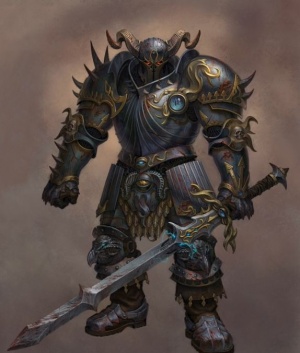 A Chosen of Tzeentch.

Chaos Chosen are those blessed few amongst the ranks of the Chaos Warriors who bear the favor of the Dark Gods far more than their fellows but have not yet become strong enough to take on the mantle of a Chaos Champion.

Known amongst their kind as Chosen, these warriors are bestowed with a variety of weapons, armor and gifts as a reward for their faithful service to Chaos, often acting as an elite bodyguard to a Chaos Lord. These gifts can vary greatly, but most mutations tend to be useful as weapons that aid the Chosen in his quest to inflict devastation and misery upon his enemies. Even if a Chosen warrior bears no such stigmata, it is clear that he carries the grace of the Dark Gods simply from his aura of dark menace. Amongst the ranks of Chaos Warriors, the Chosen are truly the nobility of Chaos.

Chaos Chosen will always lead by example, fighting not as commanders but as elite warriors. In this way, the Chosen hope to attract yet more of their master’s favour and ascend to the ranks of the truly exalted. They advance unflinchingly through black-powder firestorms, hails of arrows and punishing artillery, their purposeful tread never falters as they march ever closer to their prey. Battle lines have buckled and broken at the mere prospect of a warband of Chosen closing in upon them, blades raised so that the methodical butchery of the foe can begin. Few can stand against the full onslaught of a Chaos Warrior, even fewer can stand against the savagery of a single Chaos Chosen in combat.