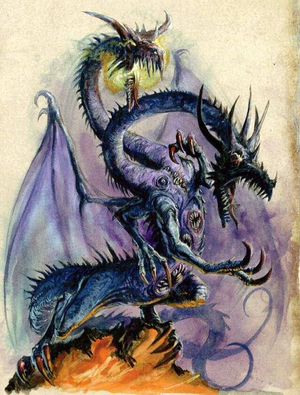 Chaos Dragons are two headed predatory Dragons corrupted and twisted by Chaos. [1a]

Their wings are boosted by black sorcery and the will of the Gods of Chaos, their natures equally wicked and twisted by their creator - Tzeentch. A single dragon can destroy an entire enemy, shreddign them with the claws and teeth, choking them with black vapour or incinerating them with fire. [1a]

The Chaos Dragons see themselves as the true servants of the Tzeentch. [1a]

All Chaos Dragons are different, some a sheathed in invisible flesh, others festoned in horns and bony protrusions or even crawling with corruption. [1a]

Most live in the Chaos Wastes and it is a rare calamity when one leaves for the realms of the mortals. [1a]