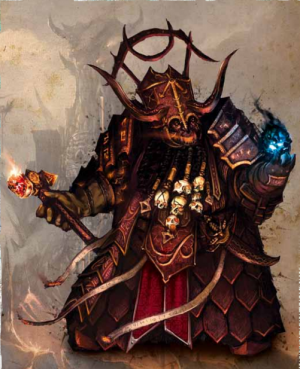 The Chaos Dwarfs, known as the Dawi Zharr in Khazalid, or Uzkul-Dhrath-Zharr in their own tongue, are the corrupted, evil kin of the Dwarfs. The Chaos Dwarfs rule an empire in the blasted Dark Lands to the east of the Old World. They worship Hashut, the Father of Darkness. [2a]

Less swarthy than their ancestors, they have palid, dead white or even green skin and favour dark clothing and armour. [3a]

During the time of the northward Dwarf migration (-4300 IC) into the Worlds Edge Mountains, some Dwarfs travelled east across the plateau of Zorn Uzkull - the Great Skull Land - in their quest for precious ores and gems, reaching the dismal Mountains of Mourn. Then, during the Coming of Chaos (-4000 IC), these Dwarfs were cut off from the rest of Dwarf civilisation by swirling Chaos energies and rampaging legions of Daemons. The rest of the Dwarfs assumed they had perished in the deluge of Chaos. In reality, the hardy Dwarfs were not killed but neither had they remained unchanged by Chaos. [1a]

Eventually even these stubborn Dwarfs succumbed to the warping effects of the Chaos energies, gradually becoming the perverted and cynical mockery of traditional Dwarfs. Some of their number even became hideous mutated fusion of Dwarf and bull - the Bull Centaurs. Abandoned by their Ancestor Gods, the Chaos Dwarfs cried out for salvation and a dark voice answered: the Chaos entity Hashut, the father of darkness.

Following Hashut, the eastern Dwarfen society started down a dark path and they became the Chaos Dwarfs at around -3500 IC whilst the great citadel of Mingol Zharr Naggrund - The Great City of Fire and Desolation is created by powerful sorcerers from black iron and obsidian in -2700 IC. The Orc and Goblin tribes of the Dark Lands and Mountains of Mourn are enslaved a hundred years later. [1a]

The first Black Orcs are created in -150 IC but only 50 years later lead an armed revolt that rages through Zharr Naggrund, before they are driven back - Many of the surviving Black Orcs flee to the mountains. The Chaos Dwarfs create a powerful fleet of warships that patrols the Sea of Dread and the River Ruin and a great canel is built linking the Falls of Doom to the Sea of Chaos to allow the warships an exit to the north. [1a]

The Hammer of Hashut, a huge test rocket as large as a tower is built and fired but goes massively off course, almost hitting Zhar-Naggrund itself and blowing a crater several hundred yards wide when it lands on a Goblin camp. Further experiments are moved to the Howling Wastes. [1b]

At the Battle of Anurell's Tomb, a Chaos Dwarf slaving expedition fights the High Elves in 2493 IC. [1a]

In 2510 IC the vast horde of Tamurkhan were met in battle by the garrison of the Black Fortress when it sought to cross the Dark Lands to attack The Empire. The Chaos army crashed against them but after their supply lines were disrupted, the Chaos Mammoths and Knights broke through the Dwarf lines and the remaining members of the Legion were forced to retreat to the fortress. Tamurkhan then offered them a chance to join his invasion of the Empire which after consideration Lord Drazhoath agreed, the pact agreed allowing the Legion the pick of prisoners and plunder in exchange for their aid in the siege of the city of Nuln. [2a]

The Chaos Dwarf empire is located in the eastern part of the Dark Lands and extends east into the Mountains of Mourn. The centre of their empire and the object of all their industry is Zharr Naggrund, a city built in the form of a monstrous ziggurat of black obsidian. [2a]

The city is built on the Plain of Zharrduk, sometimes called the Plain of Zharr - an enormous crater in the Dark Lands spanning hundreds of square miles, and located to the west of the Ogre Kingdoms. The plain is tortured by thousands of years of the industry of the Chaos Dwarfs, and its ground pitted with mines and studded with numerous workshops, foundries, fortresses and other towering edifices of industry. Throughout the plain, vast forces of slave labour of many races work ceaselessly at the endeavours of the Chaos Dwarfs. [2a]

The Dark Lands were always a barren land and thousands of years of Chaos Dwarf industry has made them even more so, covering the land in ash and choking the sky with smoke from the great foundries. The great waterway of the Dark Lands - the River Ruin, is polluted with enormous quantities of waste from Chaos Dwarf industries which is carried southwards alongside the Mountains of Mourn to the Sea of Dread. [2a]

The Chaos Dwarfs are a cruel, evil race who hold all other races in contempt. To them, the rest of the world is there only to be exploited and exists only to serve them. They are dependent on vast numbers of slaves to carry out their labour, which outnumber the Chaos Dwarfs themselves, and seem to have a penchant for obtaining more and better slaves to labour in their mines and foundries. [2a]

The Chaos Dwarfs are very technologically advanced. Without being constrained by the conservative nature of their western kin, they have developed steam technology far in advance of anything The Empire or Dwarfs possess. They are also not afraid to fuse technology with dark magic to create arcane machines of great power. The Chaos Dwarfs are not an expansionist race as they have no need for more resources. All the resources they require can be found in their own domain. All war is waged by Chaos Dwarfs with the intent of acquiring more slaves. The Chaos Dwarfs are like a slowly burning fire, content to bide their time until they can bring the world under their dominion.

In many ways they are the antithesis of the Dwarfs that remained. Where Dwarfs shun most magic except for their Runic magic, Chaos Dwarfs have embraced it; where Dwarfs worship their Ancestor Gods and despise Chaos, Chaos Dwarfs have abandoned the Ancestor Gods and submitted to the Father of Darkness. To Dwarfs, the Greenskins (Goblins, Orcs and the like) are hated enemies, while in the Chaos Dwarf empire they are slaves outnumbering the Chaos Dwarfs themselves many times over. In other ways the good values of the Dwarfs were perverted into evil ones, the Dwarfs' traditional love of craft and industry becoming mere, base rapacity.

Hashut is a Chaos god depicted as a bull-shaped idol, who demands blood sacrifices from his followers. He is worshipped by Chaos Dwarf Sorcerer-Prophets on the summits of the mighty ziggurats erected in his name. At the temple of Hashut in Zharr Naggrund the Chaos Dwarfs have created a particularly gruesome way of sacrifice. They herd their victims into the hollow belly of large statue made of bronze which they then heat with great fires lit under the belly. As the victims burn to death, their cries are funneled up the throat of the statue. Here they are changed by the reverberations of the metal until they sound like the braying of a bull, the louder the braying, the most pleased it is assumed the bull-god Hashut is with his offering. Bull Centaurs are revered as symbols of Hashut, as are the Great Taurus.

The Chaos Dwarfs, unlike the Dwarfs, are able sorcerers who wield dark, chaotic magics. Chaos Dwarf wizards are called Daemonsmiths, and the greatest of these become the Sorcerer-Prophets who are the leaders of the civilization. However this magic use comes at a price, for Dwarfs were never meant to channel sorcerous energies. Chaos Dwarfs who do harness the winds of magic find themselves slowly turning to stone from the feet up.

Chaos Dwarf armies are often composed of relatively few Dwarfs, the majority of their armies being compromised of various types of Hobgoblins, Orcs and Goblins, with the occasional unit of Dwarf or Bull Centaur thrown in to keep the Greenskins in line. As with their non-corrupted cousins, Chaos Dwarfs make extensive use of blackpowder and steam-powered weapons in the field.

Chaos Dwarfs first appeared during the 4th Edition of Warhammer Fantasy Battle, in a supplement called "White Dwarf Presents: Chaos Dwarfs." This supplement detailed the background and lore of the Chaos Dwarfs and provided a map of their territory, but only contained rules for a few units (Chaos Dwarf Warriors, Sorcerers, Lahmasu, Great Taurus, Bull Centaurs, Death Rockets and Earthshaker Cannon). No further support was given to the army by Games Workshop.[1a]

Later during the Storm of Chaos campaign in 6th edition, Chaos Dwarfs appeared crewing Helcannons which Archaon's Chaos army had apparently purchased from the Chaos Dwarfs.

In 8th edition, Forge World produced a supplement and campaign book called Tamurkhan: The Throne of Chaos. This book contained a large amount of Chaos Dwarf lore and a complete Chaos Dwarf army list called the "Legion of Azorgh", representing a Chaos Dwarf Army from the Black Fortress in the southern Dark Lands. This list was fully legal to play on the tabletop (including at tournaments) in 8th edition. Forge World produced many models from this.