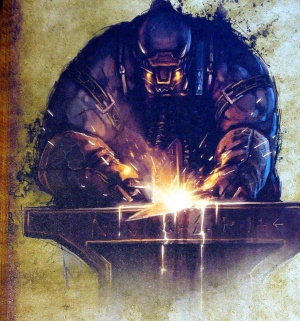 A Chaos Dwarf smith at work

The Chaos Dwarfs, like their mountain dwelling cousins, make great use of machinery in battle. More than mere blackpowder weapons, these machines have been anointed in the blood of countless sacrifices to bind daemons and other hellish beasts to them, giving them a bloodthirsty semi-life in their own right.

A small, compact but powerful steam engine, which can be attached to other war machines in order to make them mobile, or can be a weapon in its own right, especially when connected to a Skull Cracker.

A devastatingly powerful short range cannon designed to spray the target with a combination of molten metal, fire and whatever other ingredients its operators may have come up with.

The Death Shrieker fires blackpowder-propelled rockets containing tormented fire spirits. The rockets detonate above the enemy's heads and the spirits tear into them in a deadly firestorm.

A steam-powered mortar that launches huge, incredibly unstable ammunition, the exact nature of which is a closely guarded secret of the Daemonsmiths.