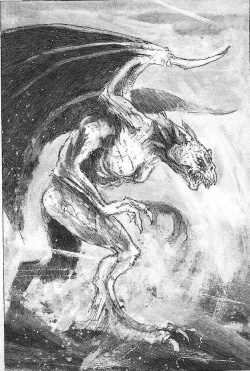 Chaos Furies are winged Daemon who are unaligned to any one of the Chaos Gods. [1a]

As a result, Furies are seen as the truest manifestations of Chaos, but are also the weakest of all daemons, viewing other daemons with a mix of awe and fear. Khorne considers them too weak, but Tzeentch favours them as spies and messengers in the mortal world as well as the Realm of Chaos. [1a]

Roosting on the edge of reality and the Realm of Chaos, Furies are usually the first daemons to enter the material world when the winds of magic blow strongly enough and are therefore considered a portent of perilous times. [1a]

Furies have reptilian wings and razor sharp claws with vestigial horns and a fur mane down their backs. Teir faces are brutal and bestial with cruel glingting eyes and many needle sharp teeth. Usually they are black in colour but can appear in any hue depending on which chaos god is in ascendance. [1a]

They are known as Chaos Shrikes, Crows of Chaos, Gargoyles. [1a]

As they are relatively weak and no Chaos Power cares if they are mistreated, they are often summoned by novice Daemonologists seeking a pliable and useful servant.If they are tasked with anything too complex, onerous, or dangerous, they will quickly grow resentful and uncooperative. [2a]

They are quite cowardly by daemonic standards and always attack in large packs and from the air to gain any advantage they can over their target. Furies are common place in most Daemon armies as they are easily swayed to support aligned Daemons as they have no patron deity of their own to decide their intentions. [1a]

Althought cowardly they will stalk wounded prey for hours or days until they descend upon their prey much like scavengers in the material world. If the victim can stand its ground, they will often retreat to seek easier prey. [1a]