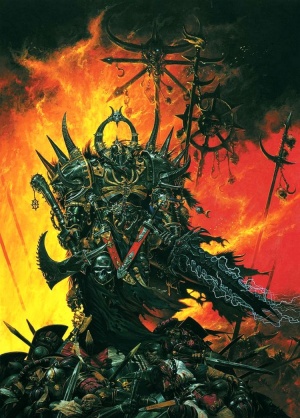 A Chaos Lord, is a legendary engine of destruction, warriors whom have earned through blood and carnage the greatest favor amongst the Northmen tribes, whose deeds have destroyed armies at a whim and whose skills at arms have decapitated rival Chaos Champions in the dozens. To be a Chaos Lord means to command the utmost power amongst the tribes of the North, and with such power and favor within their grasp, these Lords of Chaos would lead the armies of the Dark Gods into their horrific crusades against the south.[1]

Of all the mortal warriors across the civilisations of the world, Chaos Lords are the most feared, for they are truly like gods amongst men. Clad in baroque armour and rich furs, they tower above any other rival Champion of Chaos. A Chaos Lord’s indomitable will is forged in the fires of war, his skills are tempered and honed in the crucible of battle, and his blade is eternally quenched in blood.[1]

Each Chaos Lord has travelled a long and perilous road to pre-eminence, a road paved with the broken corpses of less successful aspirants. Regardless of their individual abilities, they are without exception unstoppably powerful warriors, combining the strength of a Troll with the speed of a striking snake. The Lord’s abilities are enhanced further by gifts from his patrons. Seeking ever more glory in the eyes of his deities, a Chaos Lord will test his mettle against the most accomplished of his foes’ warriors, his forbidding challenge echoing across the field. Those brave enough to meet his summons are briefly saluted before being hacked to pieces where they stand, for to stand against a Chaos Lord is to invite a sudden and brutal death.[1]

A Chaos Lord is not only an exceptional fighter but also a merciless conqueror. A great leader and strategist, his sheer force of will binds legions of men and monsters alike to his service. Each Chaos Lord’s name is spoken in hushed whispers across the lands of Men, his violent deeds written in the blood of his enemies. His is the voice that condemns whole tribes and nations to death. His gaze terrorises his followers into submission and grovelling obedience. An aura of power surrounds each Chaos Lord, drawing ever more devotees to his banner as his legend grows. When a Lord of Chaos marches to war, the world shakes, for in their hearts, all fear that one day a Lord will come who will grind the armies of the world under his heel, and bring about an age of darkness that will never end.[1]