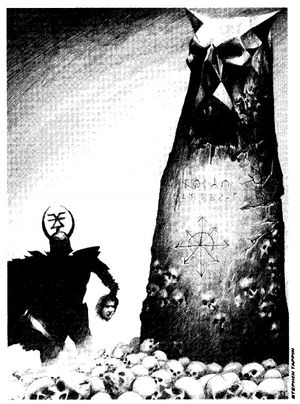 Chaos Monoliths are found in the dark places and wilderness of the world. [1a]

When a Champion of Chaos attains daemonhood, any surviving followers will erect a monolith to their power and glory. Rarely, a Champion that has been turned into a Chaos Spawn will be confined below a monolith. [1a]

Dead champions may also on occasion have a monolith erected by respectful followers and they may then be animated as a Undead champion. These tomb monoliths often guard bridges, passes or gates and the animated champion will defend it against all comers. [1a]

Beastmen also create crudely made monoliths to their Champions, usually erected near the Herdstone and these can form a circle or even circles around the central Herdstone. [1a]

Each normally bears the Rune of Chaos Undivided or the individual Power that the erecting champion worshipped. They are protected by the Daemon Prince who they are dedicated to as well as any patron power. [1a]

The deeds of the Champion in his or her mortal life are inscribed upon it and these are often proclaimed by warbands that make camp nearby. Followers of chaos that view it are drawn to read the words and experience the saga of the succesful champion. [1a]

Monoliths to Khorne are often constructed from bones and skulls although some are cast in brass, polished to a mirror finish which reflect the champion not the onlooker - although these require the skills of Chaos Dwarfs. Slaaneshi monuments in contrast can be made from crystal or even gemstones, often carved with scenes of debauchery. [1a]

Those of Nurgle always appear decrepit and crumbling with slate, shale or rusting iron favoured, often cloaked in slime, mould and mould with many slithering beasts making their homes within it. Flies swarm about it and passing Champions of Nurgle pile the bodies of the slain to add to the rot that surrounds it. Those to the Lord of Change are always spectacular but inconstant, often using exotic materials and Tzeentch may alter it at a whim. Some are even created from blood, smoke, water, fire or living flesh. [1a]

The patron power and the Daemon Prince can channel their power through the monolith and wizard champions can use it to boost their magical power. A monolith of Khorne however prevents any spell from being cast nearby. Finally nearby battles are more likely to draw the eye of the gods. [1a]