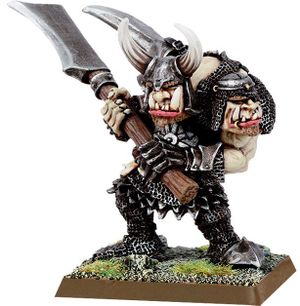 Chaos Ogres are Ogres favoured by Chaos Gods due to their combat prowess.

Although resistant to mutation, Ogres sometimes enter the service of Chaos, especially those that live in the far north. [2a][3a]

Some of the Ogres with particularly high combat prowess are rewarded with the Chaos Gods most common gift: mutation. Aptly named Mutant Ogres, these beings always lead their brethren in battle.[1] Other Ogres see them as a bit odd but also look upon extra limbs and mouths with a certain degree of jealously. [3a]

These Ogres fight alongside Beastmen[2a] and Warriors of Chaos, cleaving the enemies of the Chaos Gods apart with their axes or smashing their bones with great clubs. Even though Ogres are hardy, none are invulnerable and so they are all clad in heavy armour to prolong their survival.[1]