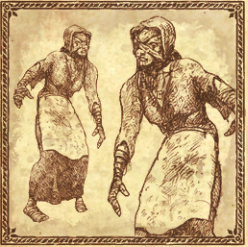 Chaos Plague Victims are the result of those people exposed to a fell Chaos Plague, turning them into insane minions of the Chaos Gods.

Perhaps it is some measure of mercy that the victims of the Chaos Plague fall ill so quickly. Those who have contracted the virulent affliction rarely last more than a week or two before the disease overcomes them. Though they suffer mightily during that time, it is over quickly, at least for them.

For those who have to deal with the monsters that rise in their place, it is a different story altogether.