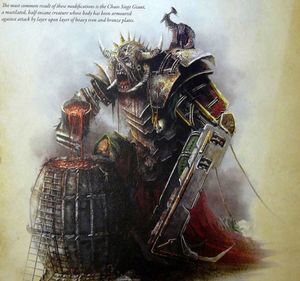 Chaos Siege Giants are powerful slaves of the Chaos Dwarfs. [1b]

The Chaos Dwarf Sorcerers have long used captured Giants, either enslaving such creatures themselves or acquiring them through trade with Ogres. These are then improved resulting in a half mad, clumsy and mutilated monster whose body is protected by layers of armour plate making it impervious to arrows and bullets. Massive flails, hooked blades and pickaxes are inmplanted or fixed to the limbs of the giant and even if they die in a siege, they are often fitted with hooks and chains to allow others to clamber up their corpse. [1b]