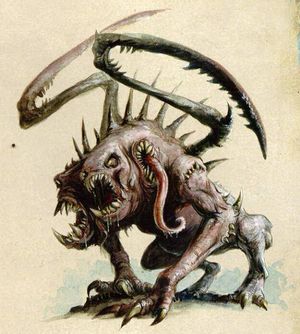 A horrific spawn of Chaos.

Chaos Spawn are followers of Chaos, mutated into a horrendous beast of flesh and sinew.[4a][5a]

Chaos Spawn lose what little remained of their original forms, becoming a shifting mass of tentacles and eyes. A rare few retain just enough of their original forms to become truly horrific. Upon the moment of devolution, the subject is wracked with agonising pain as his body ripples and undulates. The pain is so great it destroys the mind, erasing nearly every memory, all emotion, and the capability of forming a coherent thought, leaving behind an unreasoning husk of flesh and sinew.[1]

In appearance, these creatures vary widely. Some appear as the man who walks as a beast – a oncehumanoid form that has sprouted and burst into an obscene and monstrous anatomy, mutated almost beyond recognition. The eyes of the original creature peer out, a glint of its former personality barely perceptible amidst the fleshy ruin. Others appear more as the beast who walks as a man – a twisted parody of humanity moulded from the hairy, lumpen body of a forest creature.[1][5a]

Regardless of particulars, Chaos Spawn are creatures of unspeakable horror, their twisted bodies sporting an impossible array of spines, eyes and mouths. Some have the heads of overgrown insects, while others have skin that exudes poisonous slime. Some, due perhaps to the locations in which they lair, appear to be a part of the forest itself, their constantly mutating bodies having been joined with the rotten limbs of dead trees, their skin covered in dank moss.[1]

Aside from the more common spawn of Chaos Undivided, some may exhibit the traits of a particular god.