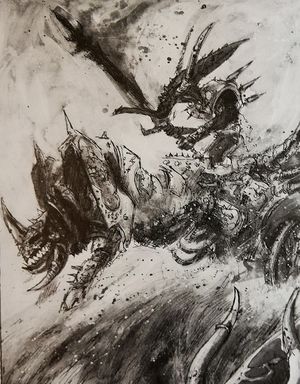 A Chariot of Khorne

Chariots of Khorne, also known as Blood Chariots, are the daemonic Chariots used by the Blood God Khorne.[1]

The chassis of the chariot is built for maximum impact upon its charging into combat, while pulled by the massive Juggernauts of Khorne who add even further to the severity of the impact. The crew are made up of Bloodletters, the foot soldiers of Khorne, who fight from the sides whilst engaged. It is not at all uncommon for Heralds of Khorne to ride atop these bulky brass creations as well. The physical chariot is also said to be alive as a daemonic soul is said to placed inside during its forging. It is believed that the trapped soul devours thoe essence of those it kills, hoping to grow strong enough to break free. [2a]