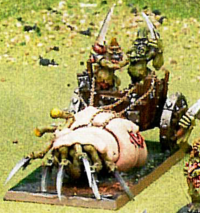 A Chariot of Nurgle converted by Asger Granerud for the Tale of Four Gamers in 2005.[1]

Chariots of Nurgle, also known as Plague Chariots, are the daemonic Chariots used by the Chaos God Nurgle.

These chariots are, put simply, careening, soggy, rotten wagons.[3] They are crewed by Plaguebearers and pulled by the filthy Beasts of Nurgle. Nurgle's strongest Daemonic Heralds are also prone to mounting themselves within these foul, destructive carts for the purposes of battle.[2]

Nurgle was the only one of the four Chaos gods not to receive a daemonic chariot in Warhammer Armies: Daemons of Chaos (7th Edition). As such they do not appear in the current rules.