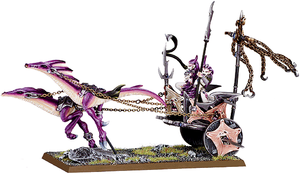 A Chariot of Slaanesh converted for the Storm of Chaos campaign in 2004 by Kirsten Williams.[1]

Chariots of Slaanesh, also known as Seeker Chariots, are the daemonic Chariots used by the Chaos God Slaanesh.[1]

These chariots are built for maximum allurement on the battlefield to distract the enemy, therefore making them less able opponents. Slaaneshi chariots are pulled by a pair of Steeds of Slaanesh and crewed by Daemonettes.

Daemonic Heralds of Slaanesh are also known to ride chariots such as these into combat. These chariots are incredibly quick, moving across battlefields with lightning speed.[2]