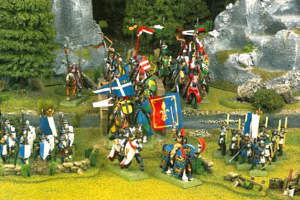 The Chevaliers de Lyonesse were a mighty force of Bretonnian Knights and Peasants, who were drawn to the banner of the famed Repanse de Lyonesse.

When Repanse was chosen by the Lady of the Lake to rescue Bretonnia from the forces of Chaos, she rode forth to rally the fragmented Knights of Lyonesse. When the knights saw a mere damsel bravely setting off to do battle with the Warriors of Chaos, and one who was undoubtedly favoured by the Lady of the lake, they felt honour bound to follow her to death and glory. While the ramparts of Couronne were cracking under the impact of the battering rams of a mighty Chaos Lord, Repanse led her Chevaliers into battle, trampling benaeth their hooves any foe in their path. When they breached the castle the Chevaliers were arrayed in a single lance formation. They cleft their way through the Chaos army until Repanse reached and slew their fell leader.

The forces of the Chevaliers were split up into several elite units.

As she was once a commoner herself, Repanse de Lyonesse was regarded affectionatly by the peasants, many of whom were eager to rally to the Fleur de Lys.