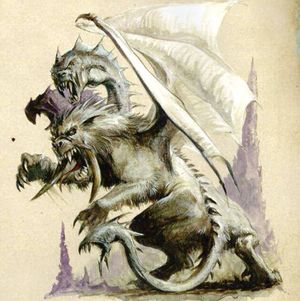 The Chimera is considered to be one of the most fearsome of the children of Chaos. [4a]

Of all the numerous creatures in the Warhammer world, Chimeras are easily the most warped, even amongst their Chaos-tainted brethren. No-one knows about their ancestral origins, for they are so terribly warped that no two ever look the same. The differences are not purely visual, for some Chimeras might spew flame or bite limbs off with the tail-mouth, while others have developed poison glands or metallic skin to keep it alive for far longer. [4a]

Most have three head and wings enabling them to fly and are often as much as 15 feet long. [2a]

Hopefully, it is hard for one beast to keep track of this mutations, and as such it is quite slow to react, giving its enemies time to appreciate these mutations before they die and stop caring about it. Chimera does, however, and so it is not particularly willing to invest its life in glorious victory for the allies, be it Scroll-bound or not and is likely to run away, should the tide of battle turn against it.[1]