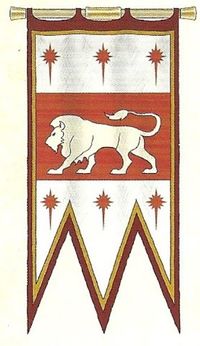 Chrace is a realm of Ulthuan, located at the northwestern tip of the island. [4a]

The land is composed of whitish mountains crossed by large parts of dense forests. [1a]

Chrace lies on a main invasion routes of the Dark Elves, and is therefore constantly subject to bitter fighting between the two nations. [1a]

Before the Sundering, the lands of Chrace were sparcely inhabited by those who sought peace in nature or time away from civilisation. [3a]

Caledor I was hunting in the forest and was ambushed as he set forth to Avelorn to become the new Phoenix King - he would have been killed if it had not been for a party of hunters. They led him past other Dark Elf patrols and safely to the Inner Sea. Since that day, the Phoenix King has been guarded by cadre of these warriors, cloaked in Lion skin and bearing their signature double handed war axes. [3a]

In 2402 IC, Shades torment the realm for a full year before they are msotly slain by the White Lions. [2a]

Chrace's forests are inhabited by the powerful, Chaos-tainted white lions, which have given their names to the immensely strong Elves which form the White Lions, the ceremonial guard of the Phoenix King. [1a]