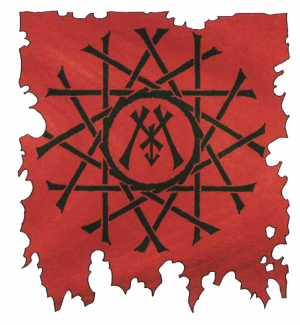 The Banner of Clan Mors.

Clan Mors is one of the most powerful of the Warlord Clans, ruled by the equally ruthless Lord Gnawdwell. Due to recent victories and prodigious expansion, Clan Mors is very near to matching Clans Eshin, Pestilens, Moulder, and even Skryre in sheer power and influence.[1]

Together, the four Great Clans might easily crush Mors, much as they have destroyed other upstart clans in the past. Yet Mors continues to flaunt its power, and none are certain why the Great Clans have failed to act as they are expected to.[1]

The Skaven of Mors are uncharacteristically united as one, and exhibit a loyalty to their leaders unheard of in Skaven society. Even those Skaven who have been conscripted into Mors from less fortunate clans are soon heard voicing praises to Gnawdwell and his staff. None are certain if this loyalty is a result of sorcery most foul, as of yet undiscovered drugs, or the product of something else that has yet to be discovered.[1]

Like any of the Lesser Clans, Mors covets a place amongst the Great Clans. Warlord Gnawdwell has made it very clear that he believes he is the one to lead all Skaven to their inevitable victory over the surface world and its furless inhabitants. Given his continued success and prowess in battle, perhaps he is correct. The other clans are hesitant to accede to his call for an invasion of the world above, citing that the time is not yet ripe for another invasion. Gnawdwell dismisses such reasons as pitiful excuses, but he his hesitant to throw away his recently gained ascension to the Council of Thirteen. So he bides his time until his place is somewhat stronger in the Council. He is instead content to rest on his laurels for the time being, basking in the plentiful adoration of his troops.[1]

Warlord Gnawdwell, the mastermind behind Clan Mors’ unbridled success and the unquestioned master of the City of Pillars‎, now sits upon the Council of Thirteen. His ruthless methods have resulted in the deaths of many of his rivals, as well as the outright destruction of at least six lesser Clans. With these triumphs, Gnawdwell has increased the wealth and power of Clan Mors to unprecedented levels. The Skaven of defeated Clans have increased Mors’ military strength, not to mention its labour force, and conquered strongholds across the Under-Empire proudly fly their banner.[1]

Rumours have spread that the Great Clans live in fear of Gnawdwell’s sinister reputation. Many great Skaven have been struck down as a result of the warlord’s schemes, and there is no telling what he will do if he is forced to defend his clan’s newfound prestige. Even if Gnawdwell himself were to be assassinated, any one of a number of his subordinates would likely rise to usurp his position. Given the effectiveness of the clan’s battle strategies to date, it would be foolish to assume it would crumble if Gnawdwell were killed.

Clan Mors has yet to prove its value to the Lords of Decay, though it will indeed have an opportunity to do so if Warlord Gnawdwell has his way. The Council itself is not yet sure how to best employ Clan Mors, and discussions between individual Council members have been heated on this topic for some time. It is no secret that Skryre wishes to see Mors destroyed, a sentiment Clan Moulder has dismissed on many occasions. Pestilens, which was in a similar position to Mors’ at one time, has yet to make a determination. Eshin, of course, keeps its own counsel regarding the upstart clan.

Of the Lords of Decay, it seems only the Seer Lord has lent his support to Clan Mors. The unity exhibited by Mors’ members, which is an obvious factor in its recent successes, intrigues the Seer Lord. If the methods by which Gnawdwell guarantees the loyalty and stability of his Clanmates can be discovered, then perhaps the Great Ascendancy will become reality. After all, it is the duty of the Grey Seers to keep the Skaven united as a race, and Gnawdwell has obviously seen some success in keeping his own forces in line.

Warlord Kritsquel battles against Daemons of Nurgle led by Kru'ar the Plaguelord in 570 IC and manages to defeat them due to his superior numbers. Those who survive all perish within a week from Nurgle's Rot. [4a]

Clan Mors employs a variety of techniques, from the tried and true waves of Skavenslaves and Clanrats to the mysterious assassinations employed by their trained killers. Perhaps their strongest asset is their use of poisons, for which they are famous throughout the Under-Empire. Still, the tactics of Clan Mors are hard to predict because their greatest strength is their rapid adaptation to the situation at hand. Unlike the Great Clans, they are not heavily invested in or beholden to any one particular method of war or weapon of choice, and that versatility is a notable asset among the often single-minded Skaven.

In battle, Mors has proven to be unrelenting, brutal, and merciless in the extreme. Forces that are put to field against the Clan are often wiped out to the last lowly Clanrat. Clans that have faced Mors’ troops in the past suffered from poor morale, largely due to the merciless reputation of their foes. By comparison, units that surrender straight away are shown quarter and isolated until their clan has been soundly defeated, at which time they are incorporated into the ranks of Mors’ Clanrat slaves.

Skaven of defeated Clans who show promise are elevated to positions of responsibility after they have proved themselves to be trustworthy. Gnawdwell feels only those Skaven who are deserving of servitude be consigned to the ranks of the slaves, while those with something to offer Clan Mors should be used appropriately. While betrayal and backstabbing are still ever-present factors within the ranks of Clan Mors, they are viewed as methods for deserving Skaven to advance the agenda of the Clan as a whole. For example, the murder of a superior that actively hinders the success of Clan Mors is akin to treason. If the shift in power is beneficial to the Clan, however, the murderer is lauded as a true patriot. {[Fn|1}}

They make use of elite, crimson armoured Stormvermin known as the Red Guard, and Gnawdwell himself is protected by a bodyguard of elite White furred Stormvermin.[3]