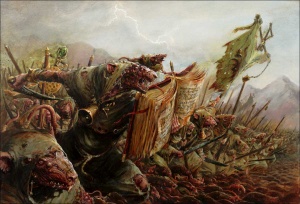 Pestilens is one of the four Great Clans that dominated the society of the Skaven. Known as the Plague Monks, the clan's raison d'etre is the spread of plague and contagion, a cause they devote themselves to with rabid energy.

The clan is ruled by a number of Plaguelords, all under the command of the Arch-Plaguelord Nurglitch, who is also one of the Council of Thirteen. Under the Plaguelords are the frenzied devotees of the Horned Rat; Plague Priests, Plague Monks and the fanatical Plague Censer Bearers, backed up by swarms of plague infected rats. They have also created war machines such as the Plagueclaw Catapult and the Plague Furnace.[3b]

During the Great Migration of the Skaven in -1500 IC, Clan Pestilens somehow found a way to Lustria. At first the clan was decimated by the virulent tropical diseases of the jungles. Their minds wracked with insane visions and on the verge of annihilation, they dedicated themselves to the plagues of the Horned Rat, arising anew, as devotees of disease.[1a][3a]

Led by their new leader, Lord Nurglitch the first, the newly formed clan set out to conquer Lustria, destroying several temple-cities and killing hundreds of Lizardmen with their plagues. Their first target was the Spawning Pools that lay to the south of Chaqua which they transformed into a festering mire from which foul things crawled out. When cohorts were dispatched from the city to investigate, they were overwhelmed and only a single sink escaped only to spread plagues to its home. [4a]

It seemed as if the Skaven were unstoppable, but then the Cult of Sotek arose. Led by Tehenhauin, a large host of Redcrested Skinks and Saurus began driving back the disease-ridden throng [2], liberating those cities which had come under siege, and sacrificing those Skaven captured in battle. Eventually the Red Host drove the foul ratmen to Fuming Serpent Island, where Clan Pestilens was finally driven away from Lustria.

Return to the Old World

In c. 50 IC, the majority of the Skaven of Clan Pestilens crossed the Great Ocean to the Southlands where they established a stronghold[1a]. The Clan then began making their way back towards Skavenblight. Long presumed lost, on returning the clan demanded a place upon the Council of Thirteen, warpstone tithe rights, among other things. When their demands were answered only with the execution of their emissaries, Clan Pestilens retaliated by unleashing their most virulent plagues upon the other clans, initiating the first Skaven Civil War. The war continued for 400 years with the South being dominated by the Plaguelords and the North being held by the Council. It was not until the reemergence of Clan Eshin and their pledge to the council that peace was restored.[1b]

When the war came too an end, the clan was granted their much earned place upon the council, and tasked with developing new plagues to unleash upon all the enemies of the Skaven. Each member of Clan Pestilens that has headed the Clan has taken the name Nurglitch as a sign of respect to their original leader. [1b]

Clan Pestilens has released many plagues upon the world but its most successful plague was the Black Plague. Released into cities of The Empire via sewers in the winter of 1111 IC it spread like wildfire. With its massive success and the near destruction of the empire the Clan rose greatly in power and status. Although ultimately the Skaven did not have the resources to enslave the whole of the Empire so the Council ordered a retreat back into their holes. [1c]

Some 700 years later in the year 1812 IC the Clan tried to unleash the Red Pox into Bretonnia hoping to replicate the success of the Black Plague. The plague failed and was brutally quarantined by the Lords of Bretonnia whilst it wiped out several holds of Skaven. After this failure the Council of Thirteen gathered and some members demanded that the Plaguelords be taken off the council this inadvertently started the second Skaven civil war when Clan Pestilens tried to seize the Temple of the Horned Rat. This war ended with the brief resurrection of the Horned Rat it was at this time when he gifted the Skaven with the Pillar of Commandments and gave ultimate authority to the Lords of Decay.[1d]

A coven of Plague Priests lairing beneath Middenland summoned the Great Unclean One Lord Bileflood, binding it with chains of meteoric iron and warpstone to fuel their search for the ultimate disease. However word reached Epidemius who mustered an army to save its fellow daemon [5a] and as the priests sought to complete their ritual of Pestilent Distillation the daemons broke into the lair and freed the Greater Daemon. [5b]

During the End Times, following the Great Uprising of the Skaven around the world, the Clan was tasked with destroying Lustria and the Lizardmen. For several years Lord Skrolk waged the war on behalf of his master who remained in Skavenblight with the rest of the Council. The war had both great success and great failure, with many Temple Cities falling to Skrolk's assaults. In the end the whole continent was immolated by the destruction of Morrslieb when great fragments of the moon strike the Warhammer World, and the vast majority of the Clan was wiped out.

The Plaguelords form the upper echelons of Clans Pestilens’ hierarchy. Under the Arch-Plaguelord Nurglitch, each of these seven Plague Priests has a particular role in Clan Pestilens society. During the End Times and the Lustria campaign, the Plaguelords were;

The identity of the seventh Plaguelord was a closely guarded Clan secret, with almost none knowing anything about him. His name, location, title and role were all a mystery.

Master of the mighty magical artifacts the Cauldrons of a Thousand Poxes, the Contagion Conclave are responsible for creating the holy weaponised plagues that Clan Pestilens spreads throughout the world. During the End Times they were led by Plaguelord Grilok and used the collected plagues, diseases, viruses, poxes, maladies and other weapons they are devised over the years and used them to great effect in the Assault on Itza. Some of the great successes of the Conclave included; • The Red Pox • Seeping Pox • Scalamundrax • The Oozing Eye

A collection of those lesser clans treaty-pledged or enthralled to Clan Pestilens including Clans Feesik, Gangrous, Fester, Morbidous, Septik and Griblobe. Their titular head was Lord Blistrox, Spreader of the Word, fifth of the seven Plaguelords of Clan Pestilens. During the End Times they formed the main thrust of the Clan Pestilens attack on Xlanhuapec, City of Mists and over ran the city. They suffered huge losses by the forces of Kroq-Gar when he marched on the ruined city to avenge it while the Clans, less devout in their fanaticism than the zealots of their Parent-Clan, were busy looting. Later they marched as part of a huge force on Hexoatl.