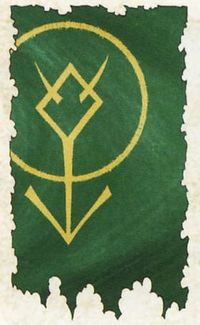 Clan Scruten (sometimes known as Scrutens) is a Warlord clan under the control of the Order of the Grey Seers and in particular Seerlord Kritislik.[1a]

Other members of the Council of Thirteen are suspicious of the clan although the Seerlord denies any special treatment and that the high proportion of expensive weapons and Grey Seers involved with the clan is a coincidence as is their use of his own rune in their iconography. Even their Stormvermin have white fur - although whether this is dyed or they are in fact Albino Stormvermin is unknown. [1a]

It was the venerable Seerlord Kritislik, leader of the order, who around 2000 IC led the clan to its new homeland in the Cursed Marshes and beneath Marienburg [1].

The Clan was later chosen by the Council of Thirteen to expand the Under-Empire to Middenheim.[2a]

The Clan stronghold is hidden beneath the Cursed Marshes and has expanded considerably so that it extends far beneath the city of Marienburg.[1a]

Its members, known as "scruts", are specialized in the arts of concealment and infiltration. Its tactics call for attacking from ambush whenever possible and avoiding direct fights.

Units of the Clan are able to live off the land for long periods of time as they keep watch on the individual or area under investigation. Their motto translates as:

Clan emblems abbreviate the motto to "Who Stares, Wins".

Clan Scruten carries out its missions using small groups of Skaven in order to remain undetected. After spending long periods of time together, unit discipline becomes rather informal and the leader is often addressed simply as "boss".