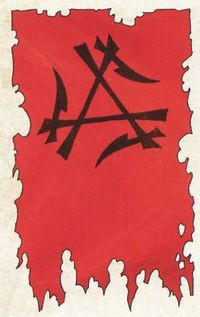 Clan Treecherik is a skaven Warlord Clan and a Thrall Clan of Clan Eshin. [1a][2a]

The clan is considered murderous and untrustowrthy even by the standards of the Skaven. [1a] This brutal infighting does mean that the survivors are more able to deal with the plots and schemes of other clans. [2a]

The warriors often wear blood coloured clothes so its less likely packmates know if they are wounded and weak. [2a]

Human cultists of the Yellow Fang are considered useful and often exploited by the Clan. [2a]