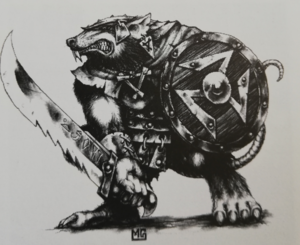 Clanrats are the common warriors of the Skaven clans, forming the bulk of any Skaven army.[1]

Mainly due to cowardice and lack of discipline, lone Clanrats are not formidable opponents except when they are attacking a weakened or crippled enemy, preferably from the shadows. Banded together in large numbers, however, they are ferocious warriors, attacking without hesitation even against obviously superior enemies.[1]

The Clanrats do their part to ensure the Skaven hierarchy is maintained, keeping down the class below them (namely the Skavenslaves), while profusely humbling themselves before those of the ranks above them. Individual Clanratsa in a stronghold that contians various different clans will try to stay up to date on the power struggles and who is strong or weak - and hence vulnerable. [3a]

Regiments are lead by Clawleaders. [2]

Clanrats are usually armed with a Hand Weapon and Shield and wear Light Armour, some use Spears.[1] Regiments can include a Musician and Standard Bearer,[2] and be accompanied by a Clan Skryre Weapon Team. [1]