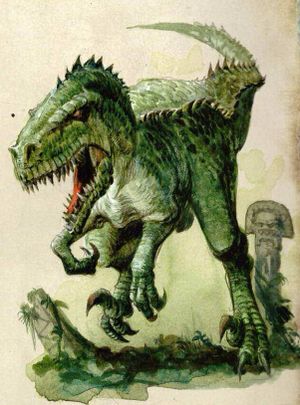 Cold Ones are dark and feral beasts that can be found in Lustria, Naggaroth and the Dragon Isles. [5a] They are large and scaly reptilian beasts with sharp teeth and large claws. Lustrian Cold Ones hunt in the tropical jungles, while Cold Ones in Naggaroth prefer the damp warmth of caves to the cold weather outside.

They vary somewhat in colour and size, the Cold Ones beneath Hag Graef are lither and darker than those of the Lustrian jungles, whilst some of those packs in the south have tiger like stripes or their hide is mottled in colour which acts as camouflage. [6a]

Cold Ones may be solitary, or they may hunt in packs.[6a] They are aggressive and have a liking of horse flesh, and normal horses are terrified by them. However, Cold Ones are not particularly intelligent, and tend to suffer from stupidity, which can paralyse them at the wrong moment.[7a]

The Dark Elf Cold One Knights must cover themselves in the poisonous saliva of these beasts in order to ride them. [3a] The Dark Elves also use two of the beasts to pull Cold One Chariots. Long-term exposure to the powerful poison destroys the nerves of the skin so that the knights have little sensation. Knights also use them for the arena game shakhtila which pits two teams of Knights against each other - the object of the game is to kill more slaves than the opposition.[1]

Certain Lizardmen Saurus may be spawned with the instinctive ability to tame and ride Cold Ones. Perhaps the normally vicious Cold Ones recognize a similar cold-blooded cunning in these Saurus. These Saurus form into units of Cold One Riders and serve as shock cavalry.

Dark Elves tend to lure packs en masse by suitable bait - a horse, human or even Dark Elf covered in blood - and then can be lured into pits or other traps. This was discovered by Shades who also steal the eggs. [6a]

There exists in the deepest jungles of Lustria and the Dragon Isles a rare breed of Cold One referred to as Horned Ones. These beasts breed within dank caverns, emerging into the rainforests to hunt. They are startlingly aggressive and extremely territorial, so much so that they will take on any other beasts they perceive as a threat, no matter its size. [5a]

They hunt in packs to attack larger prey and are able to both co-ordinate and set ambushes for their victims - they are named for the huge curling horns that are grown by the dominant male pack leaders. The sharp undulating call of one of these leaders is often the last thing the prey hears. [5a]

Very few Lizardmen are able to ride a Horned One, and only after a beast has been reared with great care from the time of its hatching. It is said that to master such a beast, a warrior must be blessed in the sight of the Old One Itzl. Such warriors are extremely rare and are often spawned alone. Those especially favoured by Itzl may sport massive crests upon their heads, marking them out from the moment they come forth from the spawning pools. Truly, these riders are great warriors, fated to perform mighty deeds in the holy name of the god of beasts.[2]

Cold Ones can live for centuries, with the oldest recorded being Kintearer who lived for 1732 years after it had been captured, serving as mounts for several lords including Anglan Arheirain, the slayer of the Loremaster Menthrith. [4a]

Although they can be broken to allow them to be riden, this also usually breaks their spirit and they become dull eyed and sullen compared to their wild counterparts. [6a]