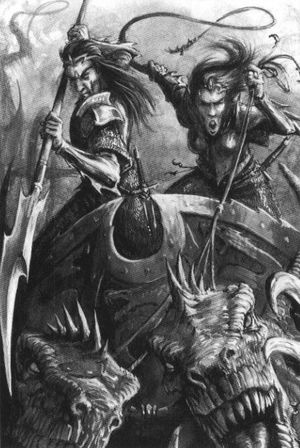 a Cold One Chariot

A Cold One Chariot is given as a gift and great honour by Malekith to those Dark Elf warriors who have pleased him in battle. [2a][3a]

Controlling the Cold Ones is difficult, and the chariot can be prone to stopping at inopportune moments but if the crew retain mastery, they can thunder about and crash into the enemy with a devestating charge. [4a]

Previously, the Witch King had ruled that only he was worthy to ride to battle in such a vehicle, [2a] the Black Chariot. [1a][3a]

The chariot has 2 Dark Elf crew and is pulled by a pair of Cold Ones. [2b]