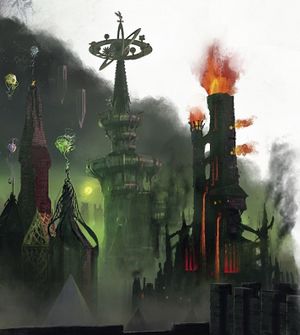 The Colleges of Magic are an established learning centre for magicians and Wizards throughout The Empire.

Primarily based in Altdorf, there is one college for each of the Winds of Magic, each of which forms the nexus of one of the orders. Each has its own masters, and the sorcery of each is different and distinct from the others, although all remains part of the great source of magic: Chaos.

Originally established by the High Elf archmage Teclis at the request of Magnus the Pious, in 2304 IC, following the Great War against Chaos and Magnus's ascension to the Imperial throne, the Colleges have flourished into fantastic learning centres from which most, if not all, the Battle Wizards of the Empire have originated. Indeed the practice of magic beyond the strictures of the Colleges of Magic is utterly forbidden and is a crime punishable by the most painful death.[2a]

Teclis chose Altdorf as not only was it situated at the junction of several magical ley lines but it was politically acceptable as a location as none of the Electors wanted the new Colleges too close to the Emperor and Magnus could still keep an eye on developments from the then captial - Nuln. [2a]

When however, the Imperial herald read the proclamation from the podium in Carnival Square, rioting erupted and lasted for three days, only being put down with the arrival of the Reikland State Army and a few dozen public hangings. Teclis then performed the rituals that would create the the Wizards Quarter or Hexxerbezrik. The resulting gathering of magical energies rendered directions almost useless as streets seemed to shift periodically, making the use of landmarks essential. [2a]

Garvan Paranoth won the position of Supreme Patriarch in 2383 IC and became well known for his codification of the hues and symbols associated with the eight lores of magic now known as the Great Wheel, a commonly recognized icon of the Colleges but to wizards however, it is known as Paranoth’s Wheel. [2b]

In 2415 IC during the contest to decide the new Supreme Patriarch, such a storm of magic was unleashed that it brought Altdorf to the brink of annihilation. Hundreds of wizards took up their staffs to settle scores with those they believed had given insult against them. The Patriarch of the Light Order was usurped and imprisoned within a crystal labyrinth by High Luminary Horx who assumed the title of Patriarch for himself. [1a][2c]

Whole quarters of Altdorf burned as Bright Wizards hurled sheets of flame and Luminarks of Hysh sent beams of searing light lancing across the city. Amber Wizards descended upon the Celestial College atop Griffons and the Astromancers fought back with the fury of the heavens. The Jade College itself seemed to come to life, trees reaching out to strangle any rival wizard who dared approach. As the night drew on, the Colleges became ever more desperate with Gold Wizards transmuted entire streets into silver and the Knights of Judgment, who owed oaths of allegiance to the Grey Order, rode forth. Albrecht Hauptman of the Amethyst Order even summoned forth Undead to fight his foes, but many within his Order labelled him a Necromancer and the College was engulfed with infighting. [1a]

Viktor Helmgart, the Grand Theogonist gathered every able-bodied soldier he could and marched on the Hall of Duels. He sundered the great arcane doors to the hall with a single blow of his warhammer and was confronted by Horx, gibbering insanely. As the soldiers died around him, he summoning every ounce of his faith and uttered a single word of justice in the booming voice of Sigmar himself, halting Horx’s magical onslaught. Seconds later and Horx slumped to the ground as a Witch Hunter’s enchanted bullet blew out the back of his head. [1a][2c]

Only Alric and the imprisoned Patriarch of the Light Order survived the magical backlash, and under the scrupulous gaze of the Grand Theogonist they began rebuilding the Colleges introducing safeguards to prevent the cataclysmic events of the Night of a Thousand Arcane Duels from ever happening again. [1a][2c] The then Emperor, Dieter IV was persuaded by the Cult of Sigmar to close the Colleges of Magic following the event and they would not reopen again until 2430 IC. [2c]

There are eight different orders of wizards in the Empire: