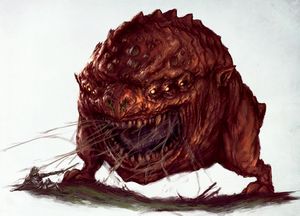 The Colossal Squigs are amongst the largest Squig breeds to ever walk this earth, growing to such a monstrous physique that it can rival the size of a small Empire warship. These legendary creatures have been known to live within the deepest darkest depths of the Vaults and the Grey Mountains of the west. A monster with an insatiable appetite, these massive Squigs are in essence no more than an impossibly vast fleshy maw studded with row upon row of scimitar-bladed teeth.[1]

Prized as the ultimate symbol of power and prestige, only the most powerful of the Night Goblin tribes have been known to lure a Colossal Squig towards the ranks of the enemy. Nearly impossible to direct, let alone train, Night Goblin Shamans must resort to drugged meat, often live and unfortunate Goblin ‘volunteers’ or hugely potent spells to overcome the crude instincts of these behemoths.[1]

Once the monster is drugged or under the influence of an impressive spell, these behemoths can literally wreak havoc upon an entire army alone, tearing through the ranks of the enemy as the creature consumes a massive amount of flesh and metal with each ravenous bite.[1]

Several Colossal Squigs were part of the Night Goblin army that attacked the horde of Tamurkhan as it attmepted to breech Winter's Teeth Pass and enter the Empire, rampaging into the Chaos Dwarf artillery and almost killing Sayl the Faithless. [2a]