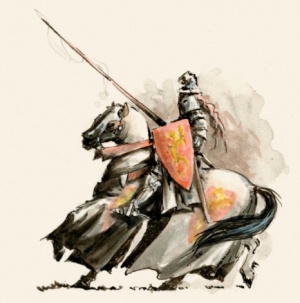 One of the heroic Companions of Quenelles.

The Companions of Quenelles were a small but elite force made up of Bretonnia's greatest knights. They fought during the End Times, taking part in its most vital battles, fighting as the elite of the more numerous Crusaders of Bretonnia.[1]

In the years prior to the events of the End Times, the Companions of Quenelles were a deadly force of Questing Knights, one of the very few Regiments of Renown in Bretonnia. Countless forays into the ever-dangerous realm of the fey bordering their homeland had honed these Knights’ skills, making them fearsome warriors indeed.[2]

By the start of the End Times the Companions had grown to include many other knightly castes, each of the Companions of Quenelles were heroes of renown and many would of passed into legend, for there was not a knight amongst them who had not performed deeds worthy of Gilles le Breton.[1]

The Companions had fought in the final battle of La Maisontaal, and many of the End Times most brutal battles, acting as a devastating shock cavalry. During the final battle of Averheim, at Jerrod's side fouhgt the same knights who had shared his every battlefield since the earliest days of the Bretonnian Civil War - or rather, those who had survived those battlefields. Gioffre of Anglaron had died beneath Krell's axe at La Maisontaal, Raynor and Hernald during the desperate battle for Altdorf. All told, scarce three score knights survived from a company that once numbered in the hundreds. However, they were the cream of what Bretonnia had once offered, driven by duty and their Lady to stand against evil wherever it was found - even in defence of the Empire. They would forge fresh legends before the battle was done.[1]

It was during this final battle that the Companions suffered their most notable loss, the ageing Grail Knight hero, Calard of Garamont fell upon the walls of Averheim, a sword in his hand and a curse on his lips.[1]

Heroes all, the Companions bore the cream of Bretonnia's warriors, Paladins, Lords and even Grail Knights were all part of this mighty band of legends.