"Drachenfels" redirects here. For other meanings of the word, see Drachenfels (disambiguation). 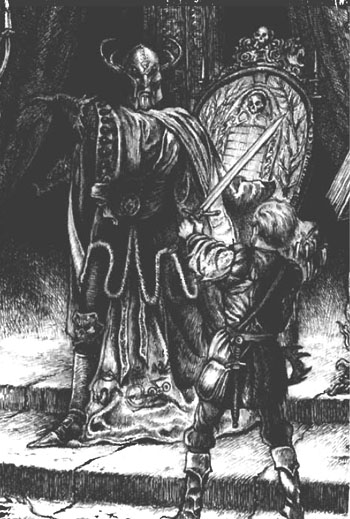 Constant Drachenfels, the Great Enchanter was a very powerful and extremely old necromancer and daemonlogist. He was one of the major powers of the Old World.

According to Drachenfels' own recollections, 15,000 years ago he was the member of a semi-human tribe "in the time of the rivers of ice, before the toad men came from the stars". Old and sick, he was abandoned and left to die by his fellow "squat and brutish tribesmen who would now seem to have more kinship with the apes of Araby than true men".[1b]

Murdering a passing tribesman, Drachenfels somehow managed to take the life out of his victim and extend his own life.Needs Citation

He would wear a body, amalgamated from the corpses of chosen victims[1b][**], until it was rotten and worn out. Then he would select a new body, repeating the whole process again and again. By repeating this process several times he survived and managed to develop his magical abilities to the highest levels.Needs Citation

Drachenfels had a collection of masks to hide his face and paid a certain amount of respect to the gods of Chaos. However he never pledged his allegiance to any of them, considering himself somewhat superior to these "undisciplined amateurs"[1a]

He established himself at Castle Drachenfels, an all but impregnable fortress high in the Grey Mountains, at an unknown date. He maintained numerous hidden spies and infiltrated agents in several cities, palaces and courts of the Old World.Needs Citation

Little is known of his atrocities. On the whole he seems to have remained mostly quiet, leaving his home on occasion to extract tribute, release plagues, unleash daemons and sack whole kingdoms.[1c] He imprisoned the souls of many of his victims, keeping and torturing them at his pleasure.Needs Citation

Drachenfels commanded a veritable army composed of goblins, but would suffer his first and greatest defeat at the hands of Sigmar, a barbarian warlord who had gathered several human tribes.[1d]

Drachenfels' army was routed and he was slain by Sigmar himself. However somehow he managed to survive and after a thousand years managed to fully restore himself.

In 1854 IC he gathered an army composed of undead and daemons and marched upon the Bretonnian city of Parravon. After extracting a suitable tribute he had the local ruling noble family executed together with their chief ministers and officials.[1c]

Some decades later Drachenfels ostensibly repented his crimes, and publicly renounced evil. Paying large reparations to his living victims, and abasing himself at the graves of many others, he managed to gain the trust of Emperor Carolus and invited the whole imperial court for a feast at Castle Drachenfels. In the infamous poison feast Drachenfels poisoned his guests, paralysing them. Helpless, they saw their children, which they had brought with them, tortured and murdered. Afterwards they starved to death with a prepared feast before their eyes.[1e]

In 2480 IC a group of adventurers, led by Oswald von Konigswald and Genevieve Dieudonné, infiltrated Castle Drachenfels and Oswald managed to kill the Great Enchanter. Drachenfels' death caused a magical backlash which killed or revealed most of his hidden agents. The castle's garrison was later put to the sword by an army sent by Emperor Luitpold, while the castle itself was left all but undamaged at Oswald's request.Needs Citation

In 2505 IC Oswald bought the abandoned castle and hired the actor and impresario Detlef Sierck to write and direct a theatre play based upon Oswald's heroic feat, to be performed in Castle Drachenfels itself. Emperor Karl Franz, his son and heir-apparent Luitpold, all the Electors and other high-ranking officials of The Empire were the invited audience of the play's premier.Needs Citation

Drachenfels re-appeared during the play, returned from all but certain death, intent on taking over The Empire. However, aided by Sigmar, Genevieve and Detlef managed to defeat and kill him.Needs Citation

During the End Times the newly resurrected Nagash brought many of the most powerful vampires and necromancers to his side to serve as his Mortarchs. One of these was referred to simply as The Nameless, the spirit of a recently defeated great enchanter from the Grey Mountains. The Nameless had no body of its own and no memory of its former life. Nagash secured its services by promising to tell it its name and restore its memory.

The Nameless traveled with the also newly resurrected Vlad von Carstein to the Auric Bastion, a huge wall to the north of the Empire designed to keep out the forces of Archaon. Vlad and the Nameless take a section of the wall to defend, quickly making it one of the strongest points on the Bastion. However the Nameless, frustrated with Vlad's refusal to tell it its name, spends its time invading the minds of the Imperial soldiery, forcing them to engage in increasingly vile tortures on each other and themselves. One day it'd have them flay their compatriots skins to make banners, the next the Nameless would change its mind, have the banners torn down and rebuilt using the soldier's bones. When the Bastion eventually collapsed the Nameless disappeared.

Eventually the Nameless returned, now possessing the body of Sigmarite priest Luthor Huss and allied to Nurgle. He marched alongside a huge daemonic army led by the possessed and mad Isabella von Carstein. Together they stage an invasion of Sylvannia. In battle the willpower of the Nameless was so strong as to steal control of Manfred von Carstein's zombie hordes, adding them to the daemonic legions, leading to Manfred's defeat.

Manfred and a few other vampire survivors (including the Mortarchs Vlad von Carstein and Luthor Harkon) fled to a nearby inn called the Dead and Buried where they were besieged by the sea of zombies and daemons. During the battle Vlad fought the Nameless in Huss' body. Knowing he could no defeat the Nameless he instead taunted Huss himself, questioning his strength and his faith, until Huss fought for control of his body eventually reclaiming it in a burst of fiery faith. The Nameless was consumed in the fire and banished.

* The quote by Drachenfels is originally from Bram Stoker's Dracula, Chapter 2.
** Drachenfels comments that he is wearing (only) the nose of Oswald's ancestor; implying that the rest of his body came from other sources.[1b]