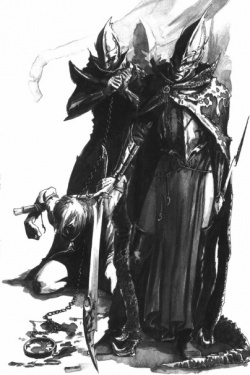 A group of corsairs and a captured slave.

Corsairs are ruthless seaborne raiders of the Dark Elves. They ply their bloody trade mainly on the Black Arks, while others sail the sea on raiding vessels. These warriors also sell their services of battle to aspiring Dreadlords who wish to raid towns and coastal settlements.[5a]

The home of the Corsairs are the Black Arks, and their lives are devoted to plundering the lands of other others. Corsairs are celebrated among Dark Elf society for their daring and drive to gain riches and glory despite the risks. They return to Naggaroth after years of raiding, often with enough slaves and plunder to establish themselves as princes. [5a]

In 554 IC a corsair fleet is dragged beneath the waves by strange submersible craft half ship and half kraken. Only one of the Druchii survives, and his tales of needle-fanged warriors from the depths are dismissed as salt-madness. [7a]

The Corsairs often feel a kinship with Mathlann, seeing him as a powerful force of destruction that lays waste to ships, ports and entire coastlines - much as they do. In addition, they are aware that placating the King of the sea and storms is wise for those who spend much of their lives on the ocean. [6a]

In battle Corsairs arm themselves with viciously serrated and curved swords, as well as compact one-handed repeating crossbows. They also equip themselves with barbed nets and grapples in order to capture escaping victims. [5a] Protection is provided by cloaks made from the scales of cratures such as the Sea Dragon, these are incredably resistant to attacks and only the most powerful of weapons can ignore such a defence. [3a]