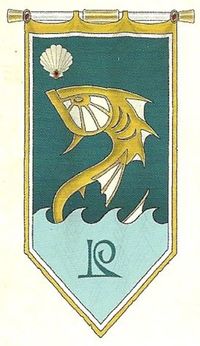 Cothique is one of the ten High Elf kingdoms or realms of Ulthuan and one of the Outer Kingdoms.

It is located in the north of the continent, and is relatively densely populated.

Erik Redaxe raided the kingdom in 2502 IC with a huge war fleet; it was later engaged and driven from the shores of Ulthuan by a fleet under the command of Tyrion. [3b]

In 2518 IC the Dark Elf Assassin, Shadowblade lead a small group of Assassins to Cothique where he poisoned the rivers causing a crippling plague. [2c]

Most of Cothique's citizens live along the coast, and it is from here that most of the accomplished High Elf mariners hail from. Many of them are filled with wanderlust and they are never happier when aboard a ship sailing as a trader or warship, sometimes even as raiders. [1a]

Elves from Cothique are considered more superstitious and often devout worshipers of Mathlann and his children, with warriors bearing images of them on their shields. [1a]

There are many small stone harbours along the coastline. [3a]

The Silver Helms of the kingdom are renowned for being able to fight mounted aboard their warships. [1a] Many of their fishing and trading vessels are also able to act as warships against the Norse and Druchii. [3a] Warriors of Cothique often helms styled as the heads of sea serpents and cloaks made from the hides of sea monsters, whilst armour is coloured blue or green. [4a] Sky ships and war-catamarans patrol the coast, archipelagos and reefs whilst messengers are dispatched on giant flying fish . [2b]

The main industries are fishing, shipbuilding and trade, whose routes extend to the Old World.[3a]