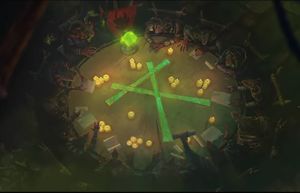 The Council of Thirteen is the ruling body of the Skaven.

The council actually consists only of 12 members, titled the Lords of Decay, the Horned Rat being figuratively the 13th member. It gathers in Skavenblight and attempts to lead all Skavendom, a most difficult task. Their political predecessors were the Grey Lords.

Their main agents are the Grey Seers, who often advise and coerce the individual Skaven Warlords, rulers of the Warlord clans, towards the appointed goal.

Counted amongst their most important assets are the adepts of Clan Eshin. These stealthy assassins are sent to murder rebellious Warlords or individual opponents. This creates a reign of fear and terror in which internal rebellions are kept to a minimum. The adepts of Clan Eshin are also vital in the conspiracy of silence, intended to hide the Skaven threat from humanity and from The Empire in particular.

An ambitious Skaven may seek to become a Lord of Decay. To fulfil his ambition he must first touch the Pillar of Commandments and survive. Afterwards he must challenge an established member to a fight to the death. If the challenger wins he will then become a full member of the council. Some have touched the pillar and a few have even survived, but none has managed to defeat any of the current members of the council, who have survived all challenges for over 200 years.

The workings of the Council are very complex. Each member casts a single vote but his respective position also influences the proceedings. A simply majority seems to suffice for most occasions. The members of the Council are under constant protection from the mighty Albino Stormvermin, pale furred Skaven who are larger than many Warlords.

Known members of the Council

The two remaining members are also Warlords [2] but their names, positions and clans are currently unknown.

The Horned Rat figuratively holds the position 13. At his immediate right and left are 1 and 12, considered the two most important positions. Then come the remaining pairs in the following order of importance: 2 and 11, followed by 3 and 10, 4 and 9, 5 and 8, and finally the positions 6 and 7 who are the furtherest away and the least important ones.

Faced with a proposal a council member may vote in favour, against it, or abstain; in the last case he vetoes the vote of his numerical counterpart.

As an example: If Lord Kritislik dislikes a particular proposal he may choose to wait for Lord Morskittar's vote.

If Lord Morskittar votes against the proposal, Lord Kritislik may safely also vote against it, thereby ensuring that the two most influential votes are firmly placed against it. This show of unity of the two most important members of the council will very likely carry a certain weight to other members.

However even if a proposal is in favour of Lord Kritilik's interests he may still vote against the proposal (or abstain) purely to spite Lord Morskittar...

This state-of-affairs ensures that higher ranking members of the council usually need the support of some of the lower ranking members, and vice-versa. All of this leads to manipulations, bribes, rivalries, backroom deals, shady agreements, favouritism and conspiracies, resulting in simple political corruption.

Assassination attempts among the members of the council are considered rather too crude (and simply non-effective). Its members usually try to manipulate the greater circumstances to force an appropriate resolution of the council. These manipulations often involve the realms of men and the kingdoms of Dwarfs.