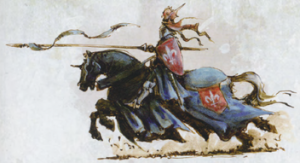 A Knight of Bretonnia.

The Crusaders of Bretonnia, was the term coined for armies of knights, sent by Bretonnia to the Empire's aid during the End Times.

In stark contrast to the filthy, blood-stained soldiers filing from the gates of Altdorf, the Bretonnian cavalry that crested Bloodpine Ridge were still as resplendent as the day they had left their castle. Bright caparisons and shining steel glowed radiantly in the light of the twin-tailed comet ahead, and the spirits of those who wore them glowed brightly too, buoyed by the chance to uphold the virtues of their realm. The corrupt and the evil would die on the points of a thousand lances, and the Empire would be rescued, forever in grateful awe of the brave riders that had come to their aid in their darkest hour.[1]

The elite of these armies were the Companions of Quenelles, a force made up of the greatest and most heroic knights left alive in Bretonnia.[1]